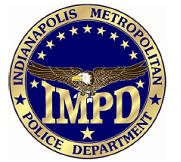 
A first for the Indianapolis Metropolitan Police Department. They will show their support for the Gay Lesbian Bisexual and Transgender community by marching in the pride parade on Saturday.

We're all used to seeing the motorcycle drill team in the Indianapolis 500 Parade and the mounted units at the St. Patrick's Day Parade, but for the first time ever our officers will actually be participating in the Gay Pride Parade.

Indy's Gay Pride Parade has come a long way since 2005 when it featured one float and a few drag queens. Fast forward six years, and spectators can expect to see hundreds of attractions, crowds in the thousands and now members of our city's finest marching right in the middle of the action.

The uniformed officers will be riding in the department issued Humvee and have specific direction to not decorate the car, change the car in any way or add anything to their uniforms.

But the fact that the officers will be participating while on the clock is troubling some. "The majority of Hoosiers and probably the majority of folks in Indianapolis if they actually went to the Gay Pride Parade and see the activities that goes on there would be shocked to see our taxpayer dollars going to have our men and women in uniform through the police and fire department march in that kind of a parade," says Ryan McCann of The Indiana Family Institute.
...
IMPD spokesperson Linda Jackson says the department doesn't think having officers march in the parade is controversial. "I don't think its an issue of the politics or an issue of anything like that. This is a parade that we would participate in. Anybody who's going to be there is there through the course of their employment in the department."
...

While I'm on record as supporting same sex marriage and think my Republican Party need to be more sensitive to the legitimate civil rights issues raised by the GBLT community, I am very troubled by uniformed police officers on the clock being active participants in this event.  It is inevitably that this event will be highlighting important political issues faced by the GBLT community, as well it should.  Participation in the parade can't but help signify a person's support for the GBLT's political positions.  That's fine for a police officer off duty and not in uniform.  It's a different story when they're getting paid with tax dollars and wearing uniforms riding in police cars or walking.

That's not something I would limit to the gay pride parade.  I do not want uniformed police officers, on the clock no less, involved in any political events. Period.  It doesn't matter if the subject is immigration, abortion, unlawful police entry into people's homes, defunding Planned Parenthood, same sex marriage, etc.  I want police officers at those events doing their job, maintaining order. Crossing the line by becoming actively involved in those events, using tax dollars to participate in an event tinged with politics, is a terrible idea.

Imagine for a second that a group opposed to the GBLT agenda decided to hold a march downtown.  Do we want IMPD officers participating in that event in uniform, on the clock?  Absolutely not.   Yet that's exactly the can of worms you open up when you get into when you start picking and choosing which events paid public servants are going to participate in using our tax dollars.

For an opposite view, please see Gary Welsh of Advance Indiana's column on the subject.
Posted by Paul K. Ogden at 9:53 AM

It's a cultural event, Paul, no different than a St. Patrick's Day Parade, Black Expo, Italian Fest or any other number of such events that occur all the time. It is not a political event. The organization that puts it on is a nonprofit that does not endorse any political candidates.

I agree with Gary.

To me, the Family Institute is anti-Christian because I could never imagine Christ acting with such hatred and disgust toward fellow human beings.

Does the Republican party try to distance itself from the Indiana Family Institute?

Gay pride day is a "cultural event"? What culture do gays occupy that is distinct from the general one? Would that be the culture of glory holes and bathhouses? Gay bars?

The cops shouldn't be participating in any "cultural" or political event. I've long had gay friends: in fact I started the first gay rights organization in Kentucky though I'm not gay. But police have two appropriate jobs: to enforce laws and maintain order. It is not their responsibility to foster social acceptance of any group, or to be the bridge between government and "cultures."

It should simply be ensured that the cops don't harass gay people behaving legally, and do enforce laws impartially.

Gary, I think there might come a time it will be strictly a cultural event like Italian Fest or St. Patty's day. But the event right now is more than that. Gay men and lesbians face a great degree of discrimination in society and I'm sure that will be an issue at the rally. You know as well as I do that there will be plenty of political signs at that parade. More power to them.

You don't see Italian and Irish political issues being promoted at their events. It's 100% a cultural event. The gay pride parade may be that someday, but right now there's no separating the political issues intertwined in the march.

These police officers are in uniform, in police cars, on the clock. I don't want them ever to be involved in any event that remotely speaks of politics.

I don't think your characterization of IFI is fair, but let me ask you this. How would you feel if IFI held a parade to promote the traditional family headed by a husband and wife? Would you want police officers involved in that parade.

I'm sure your answer would be "no" because you don't like IFI's agenda. The problem with that approach is your picking and choosing what you think is good politics.

The best thing we can do is to keep our police out of anything remotely political. Across the board. Our tax dollars should not be used to promote political causes.

I do find it interesting that my libertarian friends are strangley quiet on this issue which should be a no brainer.

How do you have pride in what you do with your weenie?

When IFI stops being a hate group disguised as a moral leader, we will have a better planet. ANY group that focuses on discrimination of any kind should be held in question. EVERYONE on our planet should have the same rights as everyone else. We are ALL EQUAL. Gay, Lesbian, Straight, Catholic, Muslim, Jewish, Anglo, African American, Spanish American, Oriental, American Indian... ALL OF US! We are all on the same bus folks. "LOVE IS LOVING ALL HUMANS EQUALLY, NO MATTER WHAT.

Hence the term: "ONE LOVE"