Governor Daniels Chooses Not to Force His Family to Relive the Past, Opts Out of Presidential Race

By now virtually everyone has seen the news that Governor Mitch Daniels has decided not to run for President.  While I wouldn't have been surprised by this decision in January when I thought there was about a 15% chance he'd run, the last several months have all pointed to a Daniels' candidacy.  This past week, I was about 70% sure he'd run. 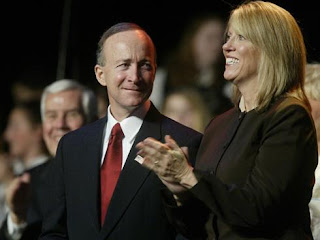 Often when politicians claim to opt out of a race because of family reasons, "family" is merely an excuse. With Daniels though I believe him.  Everyone downplayed the issue here in Indiana, but the fact is Cheri Daniels' decision to leave the marriage and four daughters behind to marry someone else and move to California in the 1990s. was an issue that would have become front and center should the Governor decided to run for President.

Contrary to the claims by some that the "far right" would not like the divorce and remarriage part of the story, religious conservatives would love the reconciliation and celebrate it as emblematic of family values.  The story unfortunately is more involved than that.  Cheri Daniels' decision to leave behind her young daughters in Indiana to move to California and marry another man, created a political problem.  It wouldn't have been a problem just with conservative voters, but with voters of all political stripes, and especially with mothers who would never forgive her leaving her young daughters behind.  On the presidential campaign trail, Cheri Daniels and the four (now) adult daughters would be asked repeatedly about what happened.  The questions were not going to go away.

Governor Daniels could have put his political ambition first and expose Cheri and their children to constantly reliving a painful episode from the past.  Instead Daniels chose to protect his family, putting their interests ahead of his own.  In a day and age of selfish male politicians having affairs at the drop of the hat, Daniels' dedication to his family is a breath of fresh air.
Posted by Paul K. Ogden at 12:03 PM

Speaking generally, and not necessarily specific to Gov. Daniels, it is unfortunate that all the mistakes, personal baggage, bad business outcomes, relationship issues and other things can always come back, even years or decades later, to haunt people who might otherwise make very good candidates for any number of public offices.

I'll bet his record as Bush's budget guru played into his decision as well. No way to spin that positively either.

And, yes Cheri has some 'splaining to do. But we'll never hear it.

Homewrecking carmelites who are always looking to "better-deal" their husbands do not play well nationally.

Truth be told, her habits would have garnered a substantial bit of sympathy for Mitch.

Cheri would have come out poorly, but Mitch would have been seen only as another victim of Cheri's husband hopscotch.

I am sure their is more to his decision not to run. I am not totally buying that family was his only reason. Hopefully the media will look into this further.