Three Murders in Indianapolis Today; Ballard's Reliance on Crime as an Issue is Doomed to Failure

I have long argued that Indianapolis Mayor Greg Ballard completely failed to use his three years in office to position himself for re-election.  Instead the issues Ballard plans to run on - jobs (or at least "commitments" for jobs)  and a lower crime rate are doomed to failure as they do not fit into the preconceived beliefs people have about those issues.   Any political strategist will tell you that there is not enough time to both convince voters that their perception about certain issues is wrong, and then use those issues in a political campaign. 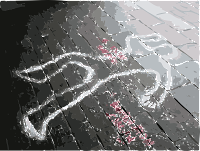 In yet another blow to the Ballard crime strategy, today featured three homicides in Indianapolis.  There was a killing this morning in the Greenbriar area on the northwest side, and a double homicide on the east side late this afternoon.  For one day at least, we have an annual crime rate over 1000.

It doesn't matter if Ballard is right about the crime rate going down, it is a losing issue for him.  It continues to amaze me how poor the political advice is that the Mayor is apparently receiving for the $10,000 he pays monthly to political consultant Jennifer Hallowell.
Posted by Paul K. Ogden at 7:23 PM

The cops really can't reduce crime, and our cops are nowhere close to being employed in any way that would do something about crime.

Indy cops believe they have a right to do whatever they want, act however they want, and they hope that they reduce a little crime in there, for public relations' value, but crime reduction is not what they set about when they go to work.

Dump the cars; dump the guns, and get these flatfoots walking beats with police whistles and speaking with the public. This will reduce crime, but they find playing cowboy more fun than playing Bobby, so they want no part of doing a good job that would actually benefit the public.

Police respond to crime; they're not the root cause.

I predicted more violence yesterday while on the way to Cincy.

It's the full moon. The pink moon.

I think if the administration were saavy, they would have more patrols during big moons.

May 3rd is THE day to do your spring planting...with the new moon.

Actually I agree with that. There are so many other factors that result in crime. Mayors and even the police have little control. Of course, when you complain about it on someone else's watch, you set yourself up to be criticized when it's your turn at the wheel.