Mayor Greg Ballard has been on a roll of late. Unfortunately for him, it's been a roll straight downhill.


With a pair of embarrassing self-inflicted blunders, both the result of overreaching and election-year pandering, Ballard is resurrecting those nagging questions about whether the surprise winner of the 2007 campaign can run a decent campaign this time around. Meanwhile, he's offered a defensive know-it-all style that is as annoying as it is unlikely to help him along the way to Election Day. 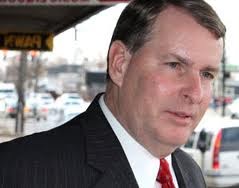 Tully then proceeds to note the embarrassing jobs "paradigm" interview with Channel 6's Kara Kenney and the disarray regarding IMPD's gun amnesty program which the Mayor didn't seem to know about.
In short, after three years of praising every unpopular, corporate welfare project Mayor Ballard has ever pushed, Tully now suddenly realizes that Candidate Ballard isn't wearing any clothes. Indeed. But as with the story of the Emperor who wore no clothes, Ballard's lack of political clothing didn't come over night. It's been three years in the making.

The last time an Indianapolis Republican mayoral candidate won during a normal election year was in 1995 with Mayor Goldsmith's re-election. In 1995, Republicans had a baseline of about 55% in the county. Now, it might be 45%.  Ballard's victory in 2007, should have been treated as an aberrant election, a gift resulting from then Mayor Peterson pushing to raise local income taxes on the heels of a property tax rebellion.

Ballard should have said "thank you" to Peterson and used the election gift to become a new kind of Republican Mayor, one who was populist, someone who reached out to working men and women as well as Democrats across the aisle. He could have positioned himself for a re-election victory. Instead, Mayor Ballard and his campaign people treated the 2007 election as if it were the norm. Ballard began governing as an Establishment, Goldsmith Republican. In the process, Mayor Ballard's administration repeatedly has used privatization and public-private partnerships as a way of funneling corporate welfare to the same fat cats who have for years profited off city government.

Now, three plus years into his administration, Mayor Ballard has no good campaign issues to run on. How about lowering the crime rate? Doesn't work. The public perception is the crime rate is increasing. With the unpopular Frank Straub's appointment and other problems in the public safety, Mayor Ballard will be lucky if he gets more than a handful of votes from IMPD officers and their families.

What about jobs? We are in the worst economic downturn since the Great Depression. The City has lost jobs which is inevitable in a national recession. The jobs issue will never sell in this economy.

What about the sale of the water and sewer utilities? Yeah, right. One thing that turns up consistently in polling is that voters HATE it when government officials sell city assets.

I'm without a single positive accomplishment that the Mayor can use as a successful campaign issue.. Then you have an assortment of time bombs waiting to go off, the 50 year parking meter deal with ACS, the Pacer $33.5 million gift of our tax dollars, the 100 plus tax/fee increases, the junkets, the country club memberships, etc. He's also alienated the tea party types, fiscal conservatives, gun rights supporters and others who would have constituted his hard-core constituency.  Mayor Ballard has no conservative philosophical base in the Republican Party.  Rather his core Republican constituency consists of those who have profited off his leadership.  While they have a lot of money, they don't have a lot of votes.

Ballard might not have the political skills and temperament for a highly-contested political campaign.  Let's not forget that in 2007, Ballard never was really tested because he wasn't seen as a threat by the Peterson folks until it was too late.  Now that he's being tested, Ballard appears to have a short fuse and is not well-informed about the issues. He doesn't appear to have the political skills one needs to win a highly-contested election with a well-funded opponent.

Mayor Ballard simply did not position himself for re-election even though he had ample opportunity to do so. Even the best campaign manager would struggle to put together a campaign message for Ballard that voters would buy. But to complicate things, as Tully notes, the campaign appears to be incompetent. That is no mirage. Ballard's political people seem to have not the slightest idea what they are doing. This is a campaign that spent an astonishing $1.3 million in three election off-years, includingabout $530,000 last year. I can't begin to emphasize enough how bizarre and unprecedented that off-year "burn rate" is. It is solely because of burning through off-year cash that Mayor Ballard finished 2010 just barely ahead of Democrat Melina Kennedy as to money in the bank.

Usually I can look at a candidate and figure out a plausible, although often unlikely, scenario by which he or she can win the election. With Mayor Ballard, I just don't see a path to victory.  He doesn't have any winning issues and he has three years of unpopular policies which will prove plenty of fodder for the Democrats to drive Ballard's negatives through the floor.

What to expect next? Expect Republican council candidates over the summer to grow frustrated with the Marion County GOP organization and Ballard's campaign. They will be screaming for help against better funded Democratic opponents only to find themselves ignored in favor of the top race on the ticket.  When the smoke clears after Election Day, you can expect a lot of finger pointing about what went wrong.  But those council members will have no one but themselves to blame.  They time after time again drank the Kool-Aid on unpopular votes that screwed over taxpayers in favor of fat cat political contributors.  The price they will pay is that many of them won't be back in 2012.
Posted by Paul K. Ogden at 11:13 AM

If I were a Democrat running for mayor, I would run one ad after another showing massive craters in streets (and possibly children swimming in them) and then label Ballard "Mayor Pothole." I've never before seen such behemoths on major thoroughfares, and for weeks on end without repair.

This is one of those times.