This morning Indiana Governor Mitch Daniels told reporters that he would make an announcement as to whether he was running for President "within weeks." 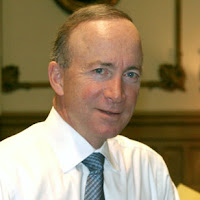 I wouldn't be surprised if the announcement doesn't come earlier than that - in particular, next Friday evening at the state Republican dinner.  Cheri Daniels, the Governors' wife, is speaking and is set to introduce to him.  In fact, the news  might be leaked before then so that the news hits the Friday newspaper rather than be confined to the worst read newspaper of the week - Saturday.

Further news is that the Governor wil sign the abortion/Planned Parenthood bill.  The General Assembly gave Daniels a huge gift in sending that bill to his desk, the ability to with a stroke of the pen set aside much of the flack Daniels would have received from social conservatives on the primary campaign trail for his "truce" comment.

I went from thinking there was about a 10% chance Daniels will run back in January, to about 55% (maybe 60%) today. The Republican field has stayed very weak and there has been a much later start in the campaigns than has previously been the case.   So much about politics is about timing and luck, and both seem to be playing into Daniels' favor this year.

Finally, the one thing that doesn't seem to get any press, but should, is the question whether Daniels would remain as Governor while running for President. I can't see that happening. Running for President is a full-time job and it would not seem to be Daniels' style to be an absentee Governor.  Further Daniels has a chance to leave on a high note with most of his legislative agenda passing.  I believe there is a excellent chance that a Governor Skillman will serve the remaining 1 1/2 years of Daniels' term assuming the Governor runs for President.
Posted by Paul K. Ogden at 1:19 PM

I hope that your speculation is wrong. Daniels’ government reform agenda is still undone.

Mitch is also going to sign a bill letting cops keep 85% of everything they steal from you.

I don't see how a forfeiture law does not automatically create reasonable doubt in any case that involves a forfeiture.

"Isn't it true that you arrested Mr. Jones and charged him with this phony crime just so you could steal his money and give yourself a pay raise?"

"Well, isn't it true that the property you stole from Mr. Jones is going straight to the benefit of your department?"

When you see a cop in America, you run.

I'm not 100% sure Cato that Daniels will sign that bill. Some Republican legislators are encouraging him to veto it since it's obviously unconstitutional as the Supreme Cour suggested just days earlier.

I was just curious. Do you think the Governor has any chance of getting nominated or elected. I mean he has never been tested either in a primary or general election. His opponents in thoose cases were all very weak at best. And I dont see his him being able to control his temper well enough to survive the liberal press attacks that he will face. Also do you think the IBM-FSSA situation could cause him trouble on the campaign field?

What if Daniels does resign? How much do you wanna bet that Becky Skillman recovers from her "health problem" to run for Governor? I personally think a primary could make Pence a better candidate. What do you think about next years race for Guv?