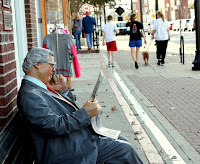 WRTV Reporter Kara Kennedy did a story yesterday on the increasing Carmel debt being the focus of the Republican Primary.  Opponents John Accetturo and Marnin Spigelman have accused the Mayor of being a big spending liberal.  Even Mayor Jim Brainard does not deny the City has vastly increased its borrowing over his last term.

I found it interesting that the City spent $1 million on statues in its Art & Design district.  Unbelievable.   Maybe Mayor Brainard would consider lowering taxes for taxpayers instead of spending it on bad, overpriced sculptures.

Of course we all know Carmel has a secret money tree which makes any expenditure possible without cost to taxpayers.
Posted by Paul K. Ogden at 11:20 AM

I guess those things are akin to duck hunter's decoys -- something to draw the wary prey in?

I saw we hire "crazy people" to sit down and have conversations with the statues. Wouldn't that be hilarious?

There's a new tariff in town.