It's rare that I am in agreement with the goals of a professional sports union. Professional athletes generally do extremely well, often earning million dollar annual salaries. The professional athletes' continued demand for more compensation in the last few decades has played a role in skyrocketing ticket prices and the shakedown of taxpayers by sports owners for more subsidies. 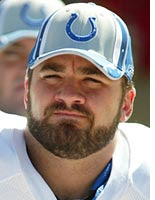 Having said that, I agree with the Indianapolis Colts union representative Jeff Saturday in questioning the wisdom of moving to an 18 game season.

This is one area that Saturday and his fellow union representatives should refuse to budge.

Playing NFL football takes an enormous toll on the bodies of the young men who play the game. After their careers are open, the players often have multiple surgeries just to do ordinary tasks that you and I take for granted. Many former players have an early onset of arthritis and others live in constant pain. Further, the health care and pensions provided to these former players isn't that good, especially for those who have short careers in the NFL. Unlike in major league baseball and the NBA, the NFL does a poor job of taking care of its retirees.

When you are a young man, you assume that your body is capable of limitless punishment. When you get older you realize the decisions you made early in your life affects the quality of life you will have the rest of your life. I read a statistic that, on average, every year that a player plays in the NFL, he loses 1-3 years off the end of his life. That, along with decreased quality of life, is an incredible sacrifice these young men make.

With an 18 game season, players will undoubtedly see their salaries increased proportionally for the extra two games. But is the extra cash in their youth worth the additional injuries and the toll on their bodies that a longer regular season would take? Is the extra cash worth the decrease in the quality of life those players will have when they were out of football? I would hope the union would say "no."

I really like pizza, but the reason why is that I don't eat it every day. It's the same thing with football. We Americans love our football, but as spring approaches and the six month season and playoffs conclude, we're ready to move on to other things. I don't see the public clamoring for a longer NFL season.

I hope Jeff Saturday and the other union representatives make the opposition to the 18 game season a priority in settlement negotiations and don't concede the issue. It's too important for the future of the players.
Posted by Paul K. Ogden at 8:18 AM

On the field Saturday is an excellent pro, a very smart player, "the Peyton" of his position.

Off the field, he & the union may have a good point about the 18 game schedule. However, wasn't it Saturday who allowed himself to be used by the criminal SEIU? What does he have to say about their illegal activities & election fraud?

I haven't followed that story so I don't know enough to respond.

I do know another project Jeff Saturday is involved in that I very much object to. He helps Kids Voice with fundraising. Kids Voice is supposed to be a neutral advocate for kids in divorce with the idea of helping the family reuninte.

My experience with Kids Voice show that the company's representatives are anything but neutral. In a divorce I was involved with, KV communitcated 90% of the time with the mother. KV advocated for the mother on property division issues, KV also worked with mother to try to get our law firm booted off the case because of an alleged conflict of interest (we had represented the couple a years earlier in a collection matter).

KV in that case refused to help the father with visitation issues even though he didn't see his kids for months at a time.

I and others have had similiar exeperiences with KV. Unfortunately they're about the only game in town when it comes to the services KV provides.

I don't really blame Saturday for his association with KV though. He undoubtedly just knows about the origanization from what he hears from the directors. If he actually knew what KV was like in the courtroom he, hopefully, would distance himself from the organization.

It's important to investigate the organizations to whom we lend our time & names.

If I recall the SEIU related story, it was something about boycotting non-union hotels & motels here in town & possibly the Superbowl if I'm remembering correctly.

Pete, I know about the boycot here in town and for the Super Bowl. That's a perfectly legitimate tactic, even if I don't agree with the goals.

What I didn't know about where the illegal activites and the election fraud you referred to.

I totally agree it's important for prominent people to check out the groups they lend their name to.

Saturday's name and 'endorsement' was appropriated without his consent.

I recall the story. It came out first that Saturday was backing the SEIU and their proposed actions against downtown hotels.

Then reporters actually got Saturday's side of it and learned the SEIU had pretty much made one of Saturday's casual comments into a full blown backing of the SEIU.