I have been active in local politics enough to rember with the legendary Marion County GOP Chairman John Sweezy who was chairman for about 20 years, in the 1970s extending to the early 1990s. John was our last full time 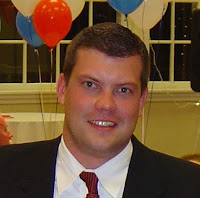 Sweezy and I had a few clashes. But I recall a Marion County Republican state legislator once telling me that, although Sweezy's operation of the GOP left some things to be desired, his leadership of the party kept a lot of selfish people from assuming his position and abusing the authority that comes with leadership. That legislator was so right. Chairmen like Tom John and Kyle Walkerare only interested in their own clout and who have no interest in reinvigorating the grass roots of the organization.

The black mark on his legacy is that John Sweezy played a part in changing the statutes governing political parties to give the county chairmen more power at the expense of party workers. (These statutes have been repealed and replaced by party rules.) But, to his credit, Sweezy always advocated the election of precinct committeemen and had no problem with slating fights. While "mummy dummy" PCs were appointed even back then to try to influence slating contests, Sweezy to his credit usually stayed out of the fights and let the township and ward chairmen battle it out.

As a result every year featured spirited slating contests for numerous races. Sweezy preached coming together after the slate was determined, arguing the endorsement process had been a "fair fight." "Fair" is a relative term of course. The slating battles back then were far from fair, but today the process is so rigged that slating battles have virtually disappeared. Of 30 slots up for slating, including the at-large positions, only two races, districts 19 and 22, featured a contest. That would have been unheard of in the Sweezy era.

Today's Republican slating convention was attended by only 300 or people, less half the attendance at the Democrats' slating. The event was held at Brebeuf High School. You'll notice the venue for Marion County Republican conventions keeps getting smaller every year as fewer and fewer party workers are interested in rubber stamping endorsements handed down by party bosses. During Sweezy's era, county-wide slating conventions regularly drew in excess of a thousand people.

A lack of slating competition, contrary to what GOP leaders claim, doesn't show satisfaction...it shows dysfunction. A healthy Marion County political organization would fill a large convention hall with enthusiastic party workers and have scores of candidates lined up to face off in intra-party endorsement contests.

Former Gov. Daniels campaign manager Eric Holcomb was elevated to State Republican Chairman following the Republican tidal wave in last November's election. Holcomb inherited a state party that scored enormous gains in every county in the state except for one - Marion County.

Holcomb needs to make Job #1 taking close look at the Marion County GOP organization and procedures, including slating which is used virtually no place else in the state. Holcomb needs to determine why the GOP is floundering in the state's largest city and make changes. His failure to do so would be a black mark on his record. The county organization will not fix itself without outside intervention from the state GOP.

The first slating convention I attended back when Goldsmith was mayor had at least 1000 people in attendance. I didn't even waste my time going to this one since there were no races. I sure as hell didn't want to hear another one of Ballard's lousy speeches and see how fatter he keeps getting. They've been holding the event in smaller and smaller venues each year to make the room look crowded.

County Endorsements are a fairly common occurrence in many places across the country, especially in urban areas.

I disagree. Pre-primary endorsements are extremely rare throughout the country. In virtually every place you look, the party takes a hands-off approach until after the primary.

We have plenty of urban places in Indiana. I think we have slating two places...Marion County and maybe Ft. Wayne.

If you have specific examples of places where slating takes place, I'd like to hear them. All the poli sci text books say you're wrong though...that pre-primary endorsements are rare.