I note with interest that Indiana Attorney General Greg Zoeller is pursuing a lawsuit against former Hancock County Sheriff C.K. "Bud" Gray to recover $42,556.33 and $10,000 from one of Gray's deputies. 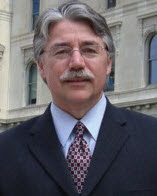 That case and how Zoeller has handled the issue of civil forfeiture makes an interesting contrast. By way of review, the civil forfeiture statute says that law enforcement costs can be deducted from the proceeds and the rest is to be paid to the common school fund. For decades though, prosecutors and those in law enforcement have been simply pocketing all the money,paying nothing to the common school fund. In the past three years, only $95,500 has been paid to the school fund by the 92 counties. That's less than recovered in many individual civil forfeiture actions.

As Attorney General and previously as AG Steve Carter's chief lieutenant, Zoeller could have done something about the misappropriation of millions of dollars by law enforcement in civil forfeiture actions. But instead Zoeller chose to do nothing, at best remaining blissfully ignorant of what was going on. Zoeller never asked that the law be enforced or that there even be accounting of the money.

Fortunately a few years ago the Indiana General Assembly passed a qui tam law, i.e. a private attorney general statute that allows private citizens to file actions on behalf of the State of Indiana if the AG fails to do so. Attorney Greg Zoeller hates the law because it allows privte citzens to take action for taxpayers when he has failed to do so. In fact, Zoeller has gone so far as to attempt to represent defendants against the State of Indiana in an attempt to recover the civil forfeiture funds prosecutors failed to pay to the common school fund. As far as I know, Zoeller is the only AG or U.S. Attorney in the country who is representing defendants in a qui tam against an action brought by a citizen on behalf of government, i.e. the people.

It is interesting to see Zoeller's zeal in his pursuit of Sheriff Bud Gray for a a few thousand dollars. It's a shame he doesn't show the same diligence on behalf of taxpayers when it comes to the tens of millions of dollars of civil forfeiture proceeds that have been misappropriated on his watch.
Posted by Paul K. Ogden at 1:45 PM