Council Members Figure Out that Giving Billionare Sports Owner Millions in Tax Dollars is Not Popular; Why Didn't Anyone Tell the Mayor?

A light apparently has gone on at the Council as members realize that giving the Simons $33.5 million in taxpayer money while libraries, parks and the 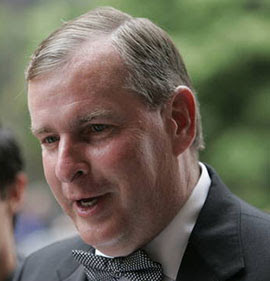 bus system is getting slashed, isn't popular. Indeed the public is downright angry about it. The Star reports:

The city sports and convention board's controversial deal to provide $33.5 million in financial assistance to the Indiana Pacers is making its budget a hard sell for the City-County Council.

Anger over what critics saw as a bailout of the Pacers still lingers, three months after Mayor Greg Ballard and Capital Improvement Board leaders announced an agreement that will keep the Pacers in town until at least 2013 by partially offsetting the team's operating costs for Conseco Fieldhouse.

On Monday, CIB officials faced questions about that deal and another recent transaction during a Municipal Corporations Committee hearing.

Members of both parties say they are reluctant to approve the CIB's budget. Council President Ryan Vaughn, a Republican, says it's a tough call when the library and bus systems' long-term fiscal health is in question.

Click here to see the rest of the article.

From watching a meeting of the Municipal Corporations Committee, it seems that Angel "Yippie Dog" Rivera is the only council member who is enthused about the multi-million dollar taxpayer bailout.

Of course, anyone with a modicum of political common sense knew months ago that the Pacer bailout would prove highly unpopular in an era when other city services are being slashed. What is shocking to me is that Ballard's advisers were so willing to send the Mayor out publicly to support the deal. This summer the Mayor was all over the airwaves promoting the deal.

The Mayor's advisers could have kept him in the background on the $33.5 million deal, letting the CIB leaders take the lead and the political hits. After all, it 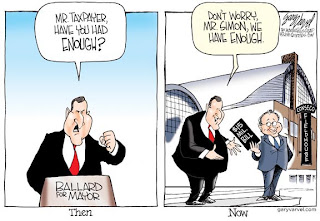 didn't matter if the public supported the deal. Only the CIB was voting on the deal and of course the Board would rubber stamp anything the CIB leadership agreed to. The Mayor's people didn't do that, instead putting him on the front lines, forever linking him with an extremely unpopular measure and providing Marion County Democratic Chairman Ed Treacy with delightful TV and radio footage supporting the deal that will certainly be fodder for Democratic ads against the Mayor should he seek re-election.

There are several possible explanations for the fact that the Mayor was pushed forward to take the lead on the unpopular Pacer deal:

1) the Mayor's advisers just aren't very bright when it comes to politics and didn't understand the political ramifications of directly linking the Mayor to the Pacer multi-million dollar giveaway;

2) The Mayor's advisers do understand politics and are deliberately sabotaging the Mayor to make sure he's not re-elected; or

3) the Mayor's advisers do understand politics, but don't care if the Mayor is re-elected and are using the Mayor's naivety to exploit him as much as possible before he goes down to defeat in the 2011 election.

#1 is out. I just don't believe anyone could be that clueless about politics. #2 is also out. The insiders would undoubtedly prefer another four years of basically doing what they want, stuffing their pockets with taxpayer money as they have during the Ballard administration. My guess is it is #3...they know the Mayor is unlikely to be re-elected and are exploiting him to the max during his term. This would explain why they ignored all political logic and sent Mayor Ballard out to take the fall for the Pacer deal.

If people don't think that GOP insiders would exploit candidates, one only need look at poor Dennis Fishburn. Fishburn was recruited to run for Marion County Sheriff for one reason only - to run against Republican Bart McAtee in a contested primary. Insiders, like Marion County GOP Chairman Tom John, spent a ton of Republican money to get Fishburn a victory in the primary, and hasn't done anything since to help Fishburn win the General Election. Rather it was all about putting McAtee in his place, not winning an election.

Ballard, like Fishburn, naively believes the insiders are there to help him. In reality they are there to exploit the naive Mayor. Sending Ballard out to fall on the political knife for the Pacers' deal is proof of that.
Posted by Paul K. Ogden at 4:15 PM

The funny thing is that Fishburn still thinks that he is the chosen one and had the backing of the party.The man has no clue that he was a toy for Tom John to play with.No one from the party has been at his last two fund raisers.he had 9 folks at one,7 of those were his campaign team

Think about the team that they could have had except for the fact that Dave Brooks and Tom John hate the McAtee family and Carlos May. May might have had a chance agaiinst Carson.he had some cash also.Fishburn has less than $11,000

Rivera is a joke, he was basicly appointed to that position by Ballard and Tom John.It was a done deal prior to the party vote.

I have a feeling that when Fishburn gets his ass handed to him that maybe the powers to be wil ask Mr. John to step down.

It would have been a hella of a team

That would have been a winner.

Ballard is toast,he just does not get it.I hope that the smarter CCC members do get it.Some of them are very good at what they do, on both sides of the isle.The only ones that have issues are the ones who do what ever Tom John tells them to do

My fear is that last night was just that 'stern talking to' a parent would give a child -- then proceed to let them off early from their punishment.

We shall know more concretely what was for show next week when the committee reconvenes.

Gee guys...you've got an awesome opportunity to get back at the GOP, David Brooks, and TOJO....just vote for the Libertarians in the race.

I'm still sick over Carlos May's loss, as it was also our loss.

Bill, if Tom John thought he would have to step down with a Fishburn loss he might be helping him. Rather it's the 2011 election that will spell John's doom.

HEI, you're exactly right. There is the mentality out there that they'll just talk tough and let them off the hook. Nobody is better at that than Lutz.

HFFT, I think the Libertarian will get a lot of votes in the 7th District. (They are running a candidate, aren't they.) One of my favortite trivia question is what state wide Libertarian received the highest percentage? Anyone.

Well Paul, you and I will have to agree to disagree about Lutz. We share a bond forged by living on either side of the airport and its property tax evading ways.