Indianapolis Mayor Greg Ballard - a Formidable Candidate for Re-Election? I'm Going to Go With "No" 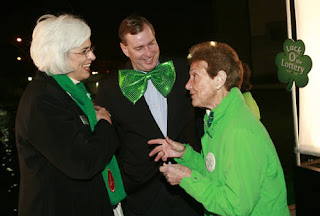 Matthew Tully pens a column this morning (not yet on-line) in which he dissects a pre-campaign campaign letter from Indianapolis Mayor Greg Ballard in which the Mayor touts his "accomplishments" in office. Tully examines the various campaign issues raised by Ballard and concludes he will be a tough candidate to beat.

Uh, no he won't be. It is true that Ballard will be a very well-funded candidate, probably the best funded mayoral candidate in history. After all, Ballard's team has become an expert in shaking down government contractors for campaign contributions. But money in politics can be overrated. If a candidate has inflicted permanent injury on himself or has issues that can be easily exploited, no amount of money can rehabilitate that candidate. As long as the Democratic nominee has the money to remind the public about Ballard's failings, the Democrat wins. Mayor Ballard has put the ball on the tee time after time again for his political opponent, perfectly positioning himself and the Marion County GOP for a crushing defeat in the 2011 election. To me it's unfathomable that this man has received any political advice at all, much less the $10,000 per month advice he's supposedly paying for.

Tully is in love with the fact that Mayor Ballard wants to address infrastructure in this city. Unfortunately he's blinded to the problems with HOW Mayor Ballard is generating the cash to meet those infrastructure needs. Using a fake sale of the utilities from one public entity to another to generate cash will simply result in short term improvements being paid for with a 30 year loan taken out by the public utility which is owned by the public. As far as the parking lease deal, I'll wait for the column in which Tully criticizes the Mayor for entering a 50 year contract to generate upfront cash for short term infrastructure improvements. At the very least, Tully should be criticizing that ACS, which has already failed at the FSSA privatization, is a client of Barnes & Thornburg attorney Joe Loftus, who is on the city's payroll to advise the Mayor.

Nonetheless, the Tully column was about the politics of a Ballard re-election run. Mayor Ballard has time and time again supported tax and fee increases, the latest being a doubling of parking fees.. You don't think the Democrats are going to point that out in a campaign? Of course, they will. To do so is to drive a wedge between Ballard and the anti-tax conservatives who supported him when he ran in 2007.

Despite what Tully hopes, making infrastructure improvements has never been a voting issue. The failure to make infrastructure improvements can occasionally be a voting issue...but that's not what is on the table.
Then you have the issue of public safety, the one area where the Mayor could have claimed a victory, albeit at best a marginal one. That issue has fallen apart.
I'm sure the Democrats will also challenge the Mayor's highly unpopular priorities. The $33.5 million gift to the Pacers will be juxtaposed against cuts to the libraries, park and public transit. That will be a devastating campaign issue.
What about the "lack of leadership" (in fairness I think it's more "poor" leadership than a lack thereof) issue that Democrats have already started to hit? The Mayor's junkets and over enjoyment of the perks of office, like country club memberships, will also be an issue.

The only way Mayor Ballard will be a formidable candidate in the Fall of 2011 is if the Democrat has absolutely no money to be able to remind the voters of what four years of Ballard's leadership has been like - broken promises, constant support of tax/fee increases, corporate welfare to billionaire sports owners, endless junkets at taxpayer expenses, and a lack of a leadership. Mayor Ballard is so obviously vulnerable, however, that any Democrat who is nominated in May of 2011 will certainly be well funded for the General Election.

Mayor Ballard has no chance of winning re-election in 2011. The minute he's renominated, the election is over.
Posted by Paul K. Ogden at 11:55 AM

I think we're be trading one pawn to a law firm & associated "players" for another in electing Kennedy, but I think Ballard's painted himself into a corner that will take a LOT of money to overcome.

Paul, There is a wild card in the mix you did not mention.

We don't know who the Libertarian candidate is. As an independent voter, I will probably cast my vote their way rather than vote for more of the same from two corrupt political parties.

Paul, Ballard couldn't buy a good column from Tully in the last election. Tully had that race completely wrong, and his anlaysis of Ballard now is completely wrong. Tully needs to learn that he needs to talk to people other than Tom John if he wants to see how Ballard is viewed by Republicans. Aside from those working for him or those who have a contract with him, you have a tough time finding Republicans who think much of him at this point. He really has no personal popularity, and that is before the Democrats have aired a single negative spot against him. He still can't speak worth a darn, and he gets flustered and defensive any time someone asks him a tough question. His own staff makes jokes about him behind his back all the time. You can always predict what Matt is going to write in advance when you see who he is meeting with someone for coffee as he is preparing to write his next column. Tully is capable of very good reporting as he has demonstrated in the past on the troubled government housing projects and public schools, but I don't think politics is his real passion. If I were him, I would put in for a change in job assignments. The Star really needs to find a tough political columnist like the Tribune's John Kass. People expect a political columnist to be tough on politicians. The last thing they want is someone they feel is simply sucking up to the politicians so their job of gathering information (disinformation as far as I'm concerned) is made much easier. Kravitz plays that tough guy role well on the sports pages. I don't always agree with him, but I really respect his honesty. He's not afraid to offend. The Star badly needs another Dick Cady, the Pulitzer prize winning columnist Gannett fired after they took over the paper from the Pulliams.

I like it. Until they get somebody who can cover politics with passion and equity, put Kravitz's "tough(ness)" on politics, Tully on society or anything requiring fact-gathering versus interpretation, and the society lady on Sports. It'll be more laughable than informative at first, but at least it won't make you want to use the paper to line the hamster cage (before you read it).

We desperately need tough political coverage, factual reporting of both sides of any and every issue, and sports coverage that doesn't think new stadiums are more essential to life than photosynthesis.

The Star badly needs another Dick Cady, the Pulitzer prize winning columnist Gannett fired after they took over the paper from the Pulliams.

Well, why not bring back Cady? He's not dead yet, is he?

And, imagine Donna Mullinix's take on the Brenda Simon brouhaha!

"Tully needs to learn that he needs to talk to people other than Tom John if he wants to see how Ballard is viewed by Republicans. Aside from those working for him or those who have a contract with him, you have a tough time finding Republicans who think much of him at this point. He really has no personal popularity, and that is before the Democrats have aired a single negative spot against him."

This quote from Gary Welsh contains two related observations that are spot on correct.

Ballard is not popular among rank and file Marion County Republicans (example: Ballard's endorsement of Ryan Vaughn for the State Senate didn't seem to persuade a single PC to vote for Vaughn.) If you think Ballard is unpopular now among Republicans, wait until the Democrats start running ads reminding the voters of all the taxes and fees Ballard has proposed raising, contrary to his mpromises as a candidate. That will tear the heart out of Ballard's support. Republican conservatives may not vote for the Democrat mayoral candidate, may vote Libertarian, or may stay home. But bottom line is many won't be voting for Ballard.

Without about 80% of Republicans turning out and voting for Ballard, Ballard is history. A good political advisor would have told Ballard the imporance of consolidating his base. Instead Ballard seems intent on doing everything he can to tick off Republicans.

Got it, everyone? His "column" is pure propaganda, the marriage of the press to the state.

The Democrats really need to give up Kennedy. She's bad enough to let Ballard win. She's merely the Democrats' Ballard, nothing of substance, simply a conduit for the people pulling the strings.

Billie Breux, the Marion County Auditor is miles ahead of Melina.

Any election with an incumbent is almost always a referendum on the incumbent. That's fatal for the Republicans running Balalrd again. Kennedy might not be a strong candidate...but she doesn't have to be. She just needs to not be Ballard and avoid committing a felony before the election.

Actually, pretty much any Democrat beats Ballard as long as he/she stays out of trouble. I agree it doesn't have to be Kennedy.

To heck with mayor. All I want for Christmas are my "Tully is a Shill for the Power Elite" bumper stickers.

If I'm an extra good boy, can I also get some, "Shella is the Big Daddy Shill for the Power Elite" stickers?