Another Bad Career Choice - Getting an MBA

Until my generation, no one in my family had gone to college. My father dropped out of high school his sophomore to go to work and help out his parents with their financial struggle. My mother yearned to go to college, but had to settle for a high school diploma.

Four of the five Ogden sons (my poor mother was 0 for 5 on producing a much wanted daughter) are college graduates. I went on to law school graduating in 1987. Besides being a lawyer, I've also have taught at the college level since 1987, teaching political science at IUPUI and now the University of Indianapolis. 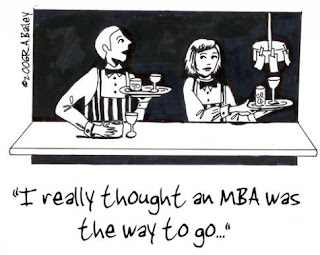 So I'm probably not the person who you would think would poo-pah the advantages of more education. However, when I saw Dana Hunsinger's article in Sunday's Indianapolis Star entitled "Study your options for an MBA," that was exactly my reaction. Here's what my advice would be for most people thinking of pursuing an MBA - do not do it.

As I have preached on these pages, law schools lie to prospective law students about the employment opportunities and salaries they will likely earn with a law degree. The profession is horribly oversaturated, unemployment is rife, and if you can land an associate salary at a law firm, you can expect a very modest salary, a salary by the way which hasn't risen more than a few thousand dollars in my 23 years of practicing law. I am all the time running across new attorneys who have six figure law school debt only to find themselves in a $30,000 associate job...that has no benefits.

It is the same thing with an MBA. Graduates with an MBA are a dime a dozen. It is estimated that graduate schools churn out 150,000 MBAs every year. The market is saturated with MBAs who can't find jobs. You probably can get someone with an MBA to clean out your garage for minimum wage, that's how plentiful they are.

I have preached that while a legal background should be highly valued in other fields, it in fact shuts doors to those fields by pigeonholing you into an attorney slot. Most employers will not consider you for non-lawyer positions, even though your legal background could prove helpful in those positions. Part of the reason why is a horribly misguided belief that lawyers can always walk away from the non-lawyer job and get a six figure job in the legal profession. The other related reason is that the law degree overqualifies a person for many non-legal jobs.

Regarding an MBA, Many of those doing the hiring for businesses, expect an employee to start at a lower level and then work one's way up. An MBA knocks a person out of consideration for many of these positions that could help the person get a foot in the door.

Trust me, when holding a job interview, hiring managers are not going to be impressed by someone with an MBA who has no real experience in the business world. People with an MBA are a dime a dozen. The hiring manager will probably have a stack of resumes of people with MBAs.

There are situations where an MBA might prove helpful. If you are well-established with a company and an MBA can help you move up, perhaps into upper-management, then getting an MBA could prove to be a good career move. But I dare say that is only a small percent of the 150,000 MBA graduates our colleges turn out every year. Most are getting an MBA on the misguided belief it will increase their income by the $10,000 to $30,000 claimed by the Princeton Review, which by the way makes its money promoting people to go to graduate school.

It is nothing less than fraud what colleges do in misleading students about the benefits of getting more education. Probably the worst two areas of abuse are the promotion of the JD and MBA.

Oh, and as far as the five Ogden brothers, the one who skipped college and became a union electrician, has made the most money over the years.
Posted by Paul K. Ogden at 11:45 AM

IS, I think there is at least a six month deferment on student loans. I'm not sure graduate school loans are treated any differently.

Of course if you go with a private lender, not backed by the government, they could attach whatever terms they wanted including a longer deferment.

You can also ask for an extension of the deferment. Fortunately I didn't have to deal with these issues.

I would say if your smart Pharmacy school is the best ticket for instant wealth. So far the government health care system hasn't hammered the drug providers yet. Your first year out of school you can easily sign on with a drug store and make a ton of cash and even have your student loan and car payments paid for by the drug stores. If you don't mind working extra hours ( and putting a ton of taxes in uncle sam's pocket) you can easily rack up 150 grand. Not bad for making sure a bunch of under paid techs put the right pills in the bottle!

That's exactly what I've told people. It's unbelievable how much pharmacists make.

Unless you get an MBA from a top-five school, you're wasting your time. Most of business is intuitively obvious, and the real way to make money, getting protected markets from governments, isn't taught. You'll learn that class from reading Paul's site.

Nobody respects a MBA as an equal to a M.A. or Ph.D. in Economics.

Hi there, I didn't understand this sentence: Part of the reason why is a horribly misguided belief that lawyers can always walk away from the non-lawyer job and get a six figure job in the legal profession.
Your article perfectly describes my situation. However, an MBA does get you closer to a PhD, and that is just one step above the MBA. There is a shortage of PhD holders in the market.
However, I am deciding to go into the medical field by becoming a Paramedic. It is a very practical, short term investment. Who wants to work for the greedy corporate world anyway? I never belonged, and my banking and government experience are also useless.
I quit the government because there was no room to move up, and I just hated dealing with so much bureaucracy. And so recently I decided that my government experience doesn't belong on my resume. Employers simply get intimidated. :)