The View from My Side of the Street - Police Misconduct 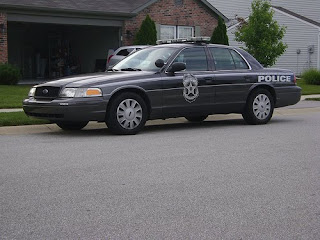 WTLC radio host Amos Brown often refers to people from "his side of the street," a reference to the African-American community. Being a white guy who grew up on a farm in SE Indiana, I must be from the other side of the street.

Blacks and whites are divided by a pretty wide street when it comes to perceptions of police misconduct. African-Americans, having experienced a history of discrimination, are deeply skeptical of the police and altercations with the public are often considered to be a result of police misconduct, at least until proven otherwise. We're seeing this played out in how the African-American community views the beating 15 year old African-American Brandon Johnson took at the hands of several white police officers. Today's Indianapolis star reports that yesterday several African-American ministers asked for a federal probe into the incident.

While whites chide blacks for their mistrust of police officers, the bias of "my side of the street" is just as bad. Listen to the conversations whites have about the Brandon Johnson incident. The immediate assumption is that Brandon Johnson did something wrong and "got what he deserved." To whites, if a police officer has an altercation with a suspect then, by golly, it's the aspect's fault because he was committing a crime. Forget due process. Because a police officer arrested the man, he has to be guilty.

It's the same attitude when it comes to police reports. Whatever the police officer says in his or her report is gospel. That's the way it happened and if the suspect says otherwise, well the suspect is lying.

As an attorney and student of life, I've learned to have a healthier degree of skepticism than my side of the street generally has. Police reports often contain great works of fiction and should be taken with a grain of salt. Law enforcement officers often get caught up in the moment and cross the line when dealing with the public. Officers often will look the other way when a colleague does something inappropriate. It is not particularly surprising that a high-stress job like law enforcement breeds a situation where officers look out for one another.

Whites need to learn too that often people who are police officers are not well suited for the job. It takes a certain temperament to be able to control oneself when faced with the inevitable frustrations and a public that often doesn't appreciate the work officers do. Whites though tend to view all police officers as dedicated public servants who can't do anything wrong. Yet for the past couple years, the Indianapolis Star newspapers have been filled with stories of one IMPD officer after another getting in trouble. The latest appeared this morning - a recently resident IMPD officer being charged with felony arson for participating in setting as many as 10 fires.

Yes, blacks and whites are divided by a pretty wide street when it comes to their views of police misconduct. Maybe it is time we meet in the middle?
Posted by Paul K. Ogden at 10:47 AM

The most important issue is how judges evaluate police testimony. Far too often judges accept it uncritically, or care little about the rights of defendants. One of the most risible myths of democratic society is the widespread perception that judges deserve respect.

The penalty for laughing in a courtroom is six months in jail; if it were not for this penalty, the jury would never hear the evidence. -- H. L. Mencken

Every person should watch this 2-part video:

Don't Talk To The Cops
http://www.youtube.com/watch?v=i8z7NC5sgik

I blame the overwhelming saturation of television programs like CSI and Law and Order. The cops are ALWAYS right, and the "bad guy" always goes to jail. What happened to shows like Perry Mason and Matlock that played things from the defense role? There's no balance in what people consume in the media, and these days, that's the only thing influencing most folks.

Paul,
One of the major problems is that the media here in Indianapolis and even throughout the United States are not impartial and do not report both sides, but jump on the side that they feel will get them ratings.
I commend the Police Chief on not making a public comment on the issue until all the facts are known. I know one of the accused police officers, and know for a fact that if for one second he thought more force was being used to make an arrest then needed he would have said something on scene, and even requested an internal affairs investigation.
People need to understand that a 15 year old can hurt someone just as easy as a 20+ year old. Just because someone is 15 does not make them an angel, and unlike the media wants you to believe this 15 year old has been arrested prior to this incident.
There are two sides to every story and then there is the truth. Until the truth comes out do not go jumping on the media band wagon deciding what happened.
I will be the first to say not all cops are good cops. I will also say that when hiring standards are lowered so those whom are not qualified for a position lack of quality becomes a norm.
Everyone seems to always down the police officers, but yet when they need one they want them there quickly and to do the job they are hired to do. I'm sure if had the mothers house been burglarized she would be complaining that the cops were not there to prevent it from happening.
The Indianapolis Metro Police Department is full of good cops, but why is it you never hear about the good they are doing in the media and in blogs.

It wasn't that long ago that IPD was being investigated by the FBI. If charges of political corruption in the area ever come to trial, IMPD might be re-investigated. Furthermore, it wasn't too long ago (2, 3 years ago?) where we had a string of incidents, most notably the Omnisource scandal, where cops repeatedly made the news. And after the first 3 scandals that year, the whole "bad apples in a whole bunch" routine got a bit old.