I spent much of the day working on this letter. I wish you all could see the pictures and video of what the State has allowed Wal-Mart to the man's property discussed in the letter. We're talking raw sewage in and around his lake. The state fined Wal-Mart, the third biggest company in the world, just $3,000 and didn't even make the company do a clean-up of 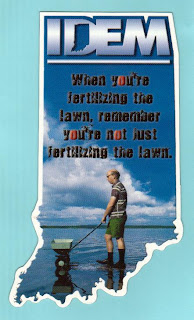 P.S. I found the IDEM logo below ironic given the agency apparently has no problem with Wal-Mart "fertilizing" a neighbor's property.

I am writing this time to formally ask that you launch an investigation into the environmental enforcement policies and activities engaged in by the Indiana Department of Natural Resources and the Indiana Department of Environmental Management (IDEM). In particular, I would ask that you focus on how individuals at those agencies have handled two separate matters involving Madison resident Paul Buchanan and the Wal-Mart located in Madison

In 2008, I visited John Scott in Madison, where I used to live. Scott and his son live on property next to the Wal-Mart in Madison. Walking next to his lake I smelled a strong ammonia-type odor. I flipped over some topsoil next to the lake and witnessed raw black sewage. Mr. Scott had the soil tested and found it had an extraordinary level of toxins in the soil. This information was turned over to state officials, including IDEM. Wal-Mart was cited for having a private sewer that overflowed. Wal-Mart was also cited for having leaky trash dumpsters that were draining onto Mr. Scott’s property.

State of Indiana officials fined Wal-Mart, the third wealthiest company in the world, $3,000 for one citation and nothing on the other. The State has not even required Wal-Mart to clean up Mr. Scott’s property and now has allowed Wal-Mart to bury raw sewage in a hill next to Mr. Scott’s property, without a liner. Unless the law of gravity is reversed, sewage will leak onto Mr. Scott’s property. Given Governor Daniels recent commitment to wetlands development, it is surprising the utter disregard state agencies have when it comes to corporate polluters and real life victims of that pollution.

The other case involves my uncle and client, Paul Buchanan. Paul lives in Madison and owns property in the China-Manville area. One day he noticed that banks of the Dry Fork Creek (the creek in this area is completely dry unless there is a storm) were being undercut by erosion. On one side, his property was about to collapse into the creek bed. On the other side, trees and a county road would eventually collapse.

My uncle took his bulldozer and pushed a couple scoops of dirt to try to shore up the banks on both sides of the creek. He was cited with a violation for his work. Before he could remove the dirt he had pushed against the bank, a 100 year storm came through the area and washed away the dirt. The creek at that point was back exactly like it was before.

The fact there was nothing left at that point to restore was not good enough for federal and state officials. They began making creative claims like his work had interfered with the spawning of fish (there are no fish – it’s a dry creek bed) and disturbed “vegetation,” i.e. weeds that are supposedly growing in the rock filled creek. They required Paul to hire engineers, environmentalists and others to come up with various plans to address these non-existent problems. They even suggested that he hire a pilot to fly over and take pictures of the area.

State officials further made the outrageous demand that Paul change his deed to include a restriction that he (and future owners of the property) no longer be allowed to work in the creek. That would mean that Paul and future owners of the property, even if they followed the law and got the proper permits, would not be able to do the very same things their neighbors are allowed to do. As a real estate attorney, I know that restriction would negatively affect the value of Paul’s property. That state officials are using their office to demand that homeowners execute deed restrictions unaware of their impact is something that alone warrants an investigation.

No matter what Paul does, it is never enough for state officials. While the federal officials eventually concluded there is nothing left to restore because of the storm, state officials are still pressing the issue. Recently we received a letter from Ron McAhron, Deputy Director of DNR wanting Paul Buchanan to make more changes to the creek on what he refers to as an “active matter.” (It’s obvious that Mr. McAhron has never been to the creek he is talking about.) While Mr. McAhron’s letter is not as threatening as most of the other state officials, my client has learned from experience that the minute he agrees to do something to placate officials, they will just start making additional demands.

Remember that $3,000 fine that the state officials hit Wal-Mart for its environmental violation? Remember that state officials have not even required Wal-Mart to clean up the property the company had damaged? Well, Paul Buchanan has spent $26,000 this last year trying to meet the demands of government officials. While the State is willing to give Wal-Mart a slap on the wrist for a major environmental violation and not even require restoration, they are more than happy to harass and bully Paul Buchanan, an 84 year old man living on a limited income. They have had Paul so worried about losing his farm, that he can’t sleep and has had trouble eating.

I hope you like me find the conduct of IDEM and DNR officials with respect to the Wal-Mart and Buchanan cases to be outrageous and that an investigation should be conducted. Please be assured that you have my and my client’s full cooperation should you decide to hold such an investigation.

I haven't stepped foot in a Walmart in years. Everything about it disgusts me.

I do, however, have a morbid fascination with The People of Walmart website. The most disgusting looking and behaving people on earth shop at Walmart.

On Monday, I will call both of the legislators and ask for them to cooperate with your rational request. Other than your uncle's horrible experiences with DNR, I do not remember hearing any other craziness about it, but over the years, have heard from attorneys on staff, that politicos who run IDEM, for years have been partial to big business, big time.

You can't hardly get any bigger than Wal-Mart. What they've allowed that company to do to that man's property is unbelievable.

Thanks for your support.