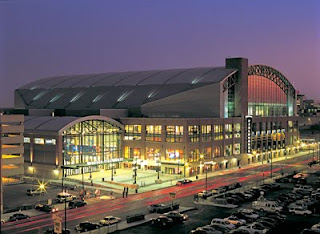 Just when I thought the Indianapolis Star was going to show some present the facts to people honestly and objectively, I'm treated to this morning's editorial where the editors say that a new Pacer deal could be win-win for both sides. If not, the Star warns, the Simons could move the team.

As someone who has studied the Pacers contract in detail, the Star omits or misrepresents several critical facts which if included in the editorial would have undermined the Star's support for more Pacer subsidies. These are:


One has to wonder why the Star has become a cheerleader for yet more public subsidies in an era in which we have city swimming pools we can't afford to open on time, library branches are threatened with closure and we are cutting bus routes. While I don't think that the Star's own investment in Conseco Fieldhouse has influenced coverage and editorials on this issue, you have to wonder the reason for the Star ignoring and misrepresenting facts in this editorial.
Posted by Paul K. Ogden at 12:46 PM

On issue after issue, Paul, there is so much disinformation that is put out by the administration and regurgitated by the local media verbatim. It is simply impossible to point out all of the inaccuracies and discrepancies in reporting by the local media any more. Ballard is leading this City into complete financial ruin and the media is patting him on the back for doing a good job. It's like a bankruptcy attorney thanking his client for being such a poor money manager that he or she needed his services.

I find it curious that, time after time, the media does 'Special Investigative Reports' for rather piddly-ass things (not that they aren't real problems) but they never sink their teeth into something like detailing this contract.

Are they afraid, does it simply entail too much effort, or have they tried and been shut down?

Actually DI, I believe Francesca Jarasz did finally get around to detailing some of the facts about the contract in an article she wrote, including the huge penalty and that the Simons have to be selling the team...they can't just pick up the team and move. The Star's editors appeared to have deliberately ignored those facts in this editorial.

I liked what Gov. Pat Quinn did in Illinois. The legislature sent him a "reform" bill for McCormick Place that included a new tax on taxi fares to and from the airport and downtown, the proceeds of which would be used to increase spending to promote the convention business in Chicago by $10 million annually. Quinn amendatorily vetoed out the tax because he viewed it as punitive to visitors to the City. The Mayor, civic types, etc. are all going ape shit. He also wrote a new provision limiting the number of collective bargaining units to 2; there are now 5 unions operating at McCormick Place. That pissed off the unions that are losing out to the Teamsters and SEIU.

It is not just the Star editorials; it is those of the IBJ also. See this one in particular; it is absolute nonsense.

Mayor Ballard and Indy are taking a lesson from Carmel's Mayor Jim Brainard. (Take a look at how each mayor uses project contractors to fund their campaign war-chests.)

Take a look at the Carmel Redevelopment Commission and the CIB....they are essential similar type entities...each spending tax payer dollars for over the top projects, each with promises of future benefits which cannot be substantiated.

The local media seems to be willing to turn a blind eye....or perhaps they just do not have the resources to conductor or know the meaning of investigative journalism...since their main idea of journalism today seems to be to publish the press releases of the various political entities.

I too wonder where journalism has gone. Indiana has major leadership issues and our ship is sinking slow financial tax/ TIF death. Carmel, Indianapolis, Avon, Greenwood, Greenfield. As for Pacers IF we can't afford the players we got hire new ones! Paycuts are happening everywhere.