Paul Okeson Claims to Be Looking Out for City's Taxpayer in Pacer Negotiations, Nose Continues to Grow As His Lies Pile Up 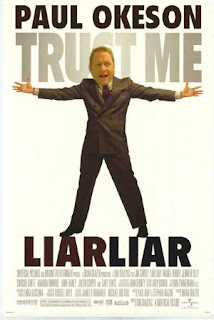 Former Indianapolis Chief of Staff Paul Okeson's act as chief "negotiator" for the Capital Improvement Board on the impending Pacer deal is wearing thin. The man has a problem telling the truth. In today's Star Okeson was quoted as saying:

"We're committed to taking enough time to make sure we're doing what is right by the citizen taxpayer and the city's economy."

Really???
Okeson and CIB President Anne Lathrop have gone out of their way to help the Pacers out in their negotiations with the CIB/City. They've ignored the numerous academic studies that demonstrate that local government subsidies of professional sports teams are a bad investment. Instead, they commission a study by a former City insider to give them cover as they try to put the City taxpayers on the hook for another $15 million a year to the billionaire Simons family.
That's not all. Okeson has deliberately ignored the contractual provisions that prevent the Simons from simply moving the team and which would require a penalty of nearly $140 million for early termination. Okeson has intentionally ignored these provisions. Reportedly, when questioned more directly about the penalty by reporters, Okeson told them the Pacers have a contractual right to offset the penalty with their losses. Folks, that set-off is not in the contract. Okeson lied.

Okeson is nothing less than a shill for the Indiana Pacers. It is in the best interest of this City and the taxpayers to not renegotiate a contract the Pacers have no leverage to break. Yet where is Okeson as this work day closes? He's at the negotiating table with the Pacers trying to reach an agreement to give away millions more in taxpayer money.

P.S. Picture is changed. Thank you BartLies for the excellent photoshop work.
Posted by Paul K. Ogden at 6:15 PM

Seems there's a wave of Pinochio Syndrome going around these days.