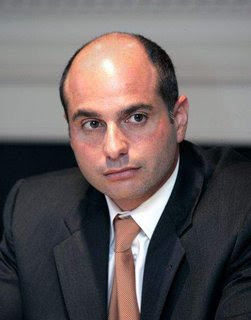 What do you do as an elected official if you find yourself immersed in scandal and facing calls within your own party to resign? You change the subject. With that time-honored strategy in mind, Marion County Prosecutor Carl Brizzi recently announced a program cracking down on dead beat parents (90% of which are fathers) by filing criminal charges if they refuse to pay.

One wonders whether Carl Brizzi will target himself for underpaying child support.

As reported in the Indianapolis Business Journal, Brizzi only pays $1,000 a month in child support for his four children. According to public records, Carl Brizzi's salary as prosecutor is $125,647 while his ex-wife makes $77,000 at the State Division of Family & Children. Using those gross salaries, I worked up a spreadsheet for child support that shows Carl Brizzi's monthly child support payment would be $1436.20.

While my calculation does include an adjustment for standard overnight visitation, it doesn't include a credit for health insurance premiums, child care, and private school tuition. Substantial payments by Carl Brizzi for those items could bring his child support payments down to $1,000 per month.

But what about Brizzi's outside income? He owns a share of Harry's and Izzy's. He owns investments with defense attorney Paul Page and real estate developer John Bales. Numerous stories have detailed those business ventures which have made Brizzi far wealthier than he would have been with his "meager" six figure public servant's salary. There is no way Brizzi's business income was included in the child support calculations and it still produced a $1,000 monthly child support figure for four children. His child support should be much higher.

As noted by the IBJ, the $1,000 figure was included in a divorce settlement. But as any one who has done family law knows, it doesn't matter that both parties agree that the father only has to pay a certain amount in child support. The Court is supposed to be looking out after the best interests of the children. That means the Court demands honest and complete income numbers from the parties and includes those figures in the child support calculation. It's not clear that the Court did that in the Brizzi divorce. Rather it appears they simply took the income at face value, and didn't include Carl Brizzi's business income in the calculation.

It's always an easy political score to beat up on dead-beat dads. Given the fact Carl Brizzi is clearly underpaying child support given his outside business income, this might not be the best subject for him to use to divert attention.
Posted by Paul K. Ogden at 11:55 AM

Wasn't he taken to court a couple years ago for NOT paying child support?

IS, I don't recall that but it's possible.

He appears to have gotten a sweetheart deal on child support.

I am a Daddy. I pay my support, and am glad too. I have no problem paying support.
I do however feel that there needs to be some accountability with Child Support, and feel that if there was accountability more Fathers would pay support.
I pay out x dollars a month. I totally understand that part of my support should go to the roof over my daughters head, transportation, food, clothing, ect.
My situation is frustrating for me. I struggle pay check to pay check while my Daughter's mother does not work, but yet is able to make a car payment, go on vacations, and out to dinner. I know I am the one paying for all this because her current boyfriend does not even have a job. This past weekend I am positive my support was used to pay for a trip to watch the Cards play in St Louis.
If a custodial parent would have to provide proof that the support is being spent on the Child I think more parents would pay the support.
I pay mine but that is because I know that in the end all it would hurt is my daughter.
I am currently working on getting full custody of my daughter, because of things going on in violation of the Court Order.

$1,000 a month child support with a lawyer's salary? Alright he may be able to get away with it. But would a good father do something like that to his own kids?