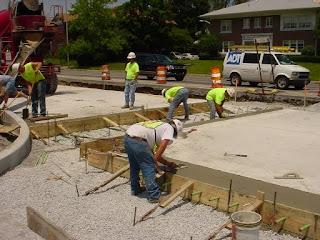 Within a year, I'm going to be in the market to replace my 2003 Mistubishi Elipse. When I bought it several years ago, I financed the car with a 5 year loan that I have since paid off. I wouldn't finance a car, which generally lasts less than 10 years, with a 30 year loan. To do so would be fiscally irresponsible...it would ensure I incurred several decades of debt in buying a car that has a very limited life span.

Unfortunately Council Republicans appear to be on the verge of adopting a proposal that will bring fiscally irresponsibilty to a new level.

Proposal 132, 2010, introduced by southside Republican Mike Speedy, authorizes the issuance and sale of up to $170,000,000 in revenue bonds "to procure funds to be applied to the costs
of the construction, renovation, rehabilitation and installation of improvements to the public ways, including roads, streets, alleys, trails, sidewalks and other public facilities, appropriating the proceeds derived from the sale of such bonds, modifying the amount of payments in lieu of taxes payable by the sanitary district. " The bonds are to last for 30 years, with the last payment due in 2039.

I don't know of too many people who would argue that Indianapolis doesn't have important, indeed critical, infrastructure needs. However, most of the the projects outlined in Speedy's proposal have a useful life of far less than 30 years.

Let's say, for example, that the money is used to repave crumbling Guion Road on the city's northwest side, a worthwhile project which I as a Pike Township resident can personally attest is needed. A newly repaved Guion Road will at best last 10 years before it will have to be repaved again. Yet, we will continue paying on that repair 20 years after the improvement has run its course. It's the same with the other improvements cited in the summary to Speedy's resolution. They all have life spans considerably less than 30 years.

Further, the bonding authority isn't limited to $170 million. The resolution, if passed, would authorize the administration to take out more bonds in excess of the $170 million for "additional projects." (See Section 24) The Council would be handing the Ballard administration (and future administrations) a blank check on issuing bonds against the PILOT.

The bond proposal - by mortgaging the future for an immediate infusion of cash for short term projects - is one of the most short-sighted things I've seen a legislative body consider. That Council Republicans, who are supposed to be fiscally conservative by nature, are supporting this rreckless administration proposal shows the desperate political situation they are in. In 2011, they will likely be on the ballot with an unpopular mayor who has forced them to betray their conservative, fiscally responsible principles time and time again. Now the Ballard administration is throwing a Hail Mary pass - proposing to mortgage the future for a flurry of Election Year construction projects that administration officials hope turn around the Mayor's re-election prospects. Rather than follow the Mayor down this fiscally irresponsible road , Council Republicans would be better advised to finally show some independence from the Mayor and start representing the best interests of the people. It is too late to save this Mayor. Council Republicans need to start looking out for themselves.
Posted by Paul K. Ogden at 12:36 AM

I hate to be the bearer of bad news, Paul, but the Council approved this at its last meeting. All Republicans plus Nytes and Adams voted in favor.

You posted the worst of the deal, and well, for sure. But, in addition, 1) this bond issue will actually finance the first few years of payments, as well, because the PILOT won't pull in enough funds to pay back the bonds for a while, 2) will cost roughly $200 million in interest payments alone, and 3) leave the next generation to make payments on this generation's frivolous financing mechanism.

This is the sort of thing candidate Ballard would have railed against. Now it is business as usual in his Administration; fiscal irresponsibility being paraded as creative financing.

My God, is this what the government has come to?

I think your analogy of financing a car with a 30 year loan is spot on.

While I see the City-County Council approving this disaster, I can scarcely believe my eyes.

I thought it was a preliminary vote...like they're doing on the utility sale. Of course you are correct.

Contrary bird brains continue to take out costly mortgages, run up debts, for the future generation of Indianapolis to pay.

Anyone watching the last 10 minutes of that May 17, 2010 Council meeting, when the concept of a public hearing was treated like a niggling afterthought, should be outraged.