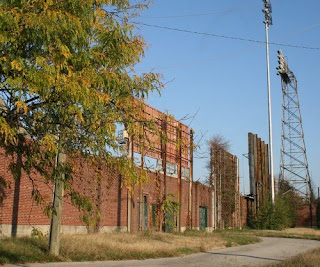 Although the article is dated November 10, 2009, I just recently read about the City's plan to store old cars from the "Cash for Clunkers" program. The Star reports:

Parks department real estate manager Paul Smith told The Star’s news-gathering partner, WTHR (Channel 13), that about 300 cars, trucks and minivans are packed tightly on the field by the company, which is paying the city $2,000 a month.

My question is doesn't this possibly pose a major environmental hazard? A Vermont group looking at junkyards had this to say about environmental problems they could pose:

The Agency of Natural Resources’ main concern with junkyards is the potential or environmental contamination from fluids that are not drained or not completely drained and leak into the ground from the vehicles. The fluids that are most often collected are antifreeze, engine oil and gasoline. Other fluids that must be handled include freon/CFCs, parts cleaning solvents, brake/ steering/transmission fluids, and windshield washer fluid. Stormwater runoff from a junkyard is also a concern as it may contain some or all of these fluid wastes. Estimated total waste fluid generated in one year in Vermont from junkyards is 102,000 gallons. Other types of waste include batteries, air bag cartridges, tires and rubber, glass, plastics, metals and mercury switches. An estimated 18,000 mercury switches can be found in salvaged vehicles in Vermont each year, and the potential exists for 32-40 pounds of mercury to be released to the environment from those vehicles each year.

What assurances do we have that the vehicles at Bush Stadium have being drained of these fluids? And what about the iron rust from the cars going into the soil? I'm no expert, but I would think that using Bush Stadium as a junkyard could lead to an expensive environmental cleanup that far exceeds the $2,000 per month the city is receiving.
Posted by Paul K. Ogden at 10:54 AM

Thanks, I just realized that when I looked back at the article after having more caffeine. I had the St. Louis Cardinals and their Busch stadium on my mind. They have a big game there today against my Reds.

Oops, remembering better, the CYO Field was/is located a few blocks away, on the north side of 16th St. It has since been renamed. Have a great week.