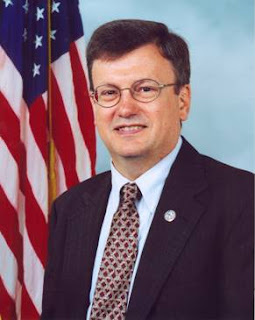 2010 has now seen then end of the political line for Marion County Prosecutor Carl Brizzi, U.S. Rep. Steve Buyer, Sen. Evan Bayh (at least for now) and now Rep. Mark Souder.
Congressman Mark Souder resigns in the wake of an affair he had with a female staffer. The Indianapolis Star reports.
I could be wrong, but I believe the process is that a caucus of Republican precinct committeement in Congressional District 3 will pick someone to finish out Souder's term. Republican party leaders will have to appoint a ballot replacement for Souder who won the May primary.
While Souder and Buyer's late hour resignations appear legitimately related to personal issues, I'm a bit surprised there has not been more backlash to the Bayh resignation, the timing of which seemed disingenuously aimed at ensuring that party insiders, rather than Democratic primary voters, picked his replacement on the ballot.
Posted by Paul K. Ogden at 11:07 AM

Let us see some resignations of State and Local officials in Indiana that have written themselves huge contracts, state appointed officials having affairs with State elected officials and being rewarded with lucrative board positions on companies that have defaulted in the hundreds of millions of dollars.

They all know who they are. The State Officials who allowed their friends to write their own contracts should resign as well. The legal profession in Indiana certainly will better for them to go now and settle their illegal activity.

The citizens of Indiana and the United States deserve better!

1. Souder represented the 3rd District, not the 4th.

2. Per the U.S. Constitution, nobody can get to the House by caucus or appointment: there must be an election by the people of the District. Period!

3. There is no hue & cry about Bayh's resignation timing except from Republicans desperately grabbing for a campaign issue to divert people away from observing aged Washington DC insider lobbyist Dan Coats. Who else except Ellsworth could have reasonably gotten the nomination in a Democratic primary?

Wilson, you were doing real well until #3.

I think you're right...there needs to be a special election to fill that seat. I forgot about how the 7th Circuit was handled. That's going to be a pain. Regarding the district number I fixed.

As far as Bayh intentionally waiting until the last minute to drop out so there wouldn't be a contested primary, you don't quite deny that do you? I'm sure if the shoe were on the other foot, you'd be screaming about GOP primary voters being cut out.

As far as Coats goes, I think nominating him, with the flaws you mention, is the only way the D's could have prevailed in this election cycle. Coats gives Ellsworth a real chance to win.

For chuckles, watch the video of Souder's secret mistress questioning him about his stands on abstinence. And so it goes.