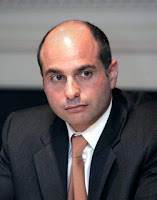 Wow, the soap opera is getting more interesting. This story appeared in the on-line version of the Indianapolis Star late Friday:

Marion County Prosecutor Carl Brizzi's request for a special prosecutor to investigate one of the people who has called on him to resign has brought a new twist to the saga surrounding the embattled politician.

The ex-wife of county GOP Chairman Tom John has accused him of forging her name on a loan form, leading to a three-month investigation by an Indianapolis Metropolitan Police Department detective, who referred the case to Brizzi's office.

John told The Indianapolis Star on Friday that he signed his then-wife's name to
obtain a deferment on a joint student loan. He did so, he said, while the couple were going through a divorce in 2008.

But John said his ex-wife is now attempting to criminalize a dispute from the acrimonious proceedings two years ago.

Brizzi's staff filed the motion Thursday in Marion Superior Court, just three weeks after John called on Brizzi, a fellow Republican, to step down over controversy surrounding his business interests and perceptions of favoritism as prosecutor. Brizzi has defended those decisions as well as his real-estate partnership with a defense attorney.

Noting the timing, Brizzi said retribution played no role in his decision to seek a special prosecutor.

"I have not seen the probable cause affidavit," Brizzi said. "I have not talked to the detective, and within moments of being informed that IMPD was pursuing a case against Tom John, I told my chief of staff to file for a special prosecutor. We did not discuss it further."

Read the rest of the article by clicking here.

Far be it from me to side with Tom John, but I have to wonder what is going on here. I doubt that any other forgery allegation of this type in the midst of a divorce proceeding would not even have been investigated by IMPD or even considered by the Marion County Prosecutor's Office. Here we are talking a matter in which John is alleged to have forged his wife's name to get a deferment on a student loan. Anyone who has done any kind of divorce work knows that the parties often will sign each other's names on documents and, although that is not something that should be done, those situations are generally handled within the context of the divorce proceeding, not something that is criminalized.
It is interesting that the Marion County Prosecutor's Office suddenly has an interest in forgery cases. My client tried to give the Prosecutor's Office and IMPD a rock-solid forgery case a couple years ago. The client owned two houses as investments in Indianapolis. Another individual came along, a complete stranger who my client had never even met, and forged my client's name on quit claim deeds and then sold the houses to a third party. The guy admitted to forging my client's names on the deeds in court documents. (He claimed he had a right to do so because the property was run down and the client was behind in property taxes.)

My client turned over all this evidence to the Marion County Prosecutor's Office. MCPO wouldn't even consider the case and told my client that the forgery was a civil and not a criminal matter. This wasn't the first time that Brizzi's office has ignored white collar crime, especially real estate fraud. White collar criminals have long been given a free pass by Carl Brizzi in Marion County. While it's good that nearly 7 1/2 years into his time in office, Brizzi has decided to stop ignoring white collar crime, his first target - his new political enemy, Tom John - is more than a little suspicious.
Posted by Paul K. Ogden at 3:12 AM

This must be what Brizzi meant when he said people who live in glass houses shouldn't throw stones. And you're right about the fact that it would have not been an issue were it not for the fact that Brizzi had a score to settle. I have a good friend who is going through a divorce and his wife has been forging checks for months. She even stole one from the mailbox. The prosecutor in a neighboring county refused to prosecute because he said it was a marital issue rather than a criminal one.

I can't help but wonder if this is just the first political hit of many more to come against all the people that threw Brizzi, and rightfully so, under the bus.