How Not to Do PR: Pacers v. Libraries 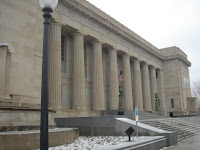 You have a big announcement coming up that you expect will get substantial media coverage. As the PR person for the event, which of the following do you do first?

a. You issue a media advisory hinting about the nature of the announcement and giving the specifics regarding when and where the event will be held.
b. You reserve the room for the event and check on the media set up.
c. You check with local politicians to see if they can attend the event.
d. Before setting the date of the announcement, you closely check calendars to make sure there is not another event scheduled for the same day might that would detract from the media coverage of your announcement.

As any junior PR associate would tell you the answer is "d." You don't check the calendar and you can end up with the PR disaster the Capital Improvement Board experienced yesterday and recounted in today's Indianapolis Star. Two stories on the front page, above the fold. One detailing library closures, the other detailing why the Pacers should get $15 million more of our tax dollars. Pacers v. Libraries. The blue and gold have no chance of winning that PR battle.

While both meetings had undoubtedly been scheduled for awhile, I am surprised the leadership of the CIB wasn't savvy enough to make up an excuse to move the CIB meeting. The result is on every television station and newspaper the story about giving the Pacers $15 million more was juxtaposed against the closing of the library branches. It was a PR disaster. Those who teach the art of media relations should keep today's Indianapolis Star as evidence of how not to do PR.
Posted by Paul K. Ogden at 9:01 AM

Whoever does scheduling for these things is dropping the ball. Maybe the CIB and the City-County Council have the same planner. Once again, they planned two committee meetings at the same time. Rules and Public Policy and Municipal Corporations are both meeting tonight, and both are meetings I'd like to be in attendance.

It's a busy week for this. Pike Township had a forum on the utility sale last night, tonight I'll hit up the council, and Wednesday I'll be at the Library Services Center.

IIRC, when the Mayor was elected he was immediately corralled by the GOP "Deciders in Charge" and it was explained to him how he now needed to tap the vast experience pool of old hands capable of managing the City, instead of looking to the Mayor's most lioyal campaign supporters who were derided as tyros (and worse).

Now, look who can't seem to run the City without looking like a bunch of clueless chumps? Murders ramping uncontrollled, CIB the same as it ever was, and more.

I suppose it's too late to relate that old saw about people who lives in glass houses, huh?

Who cares if the Pacers "lost" the PR campaign today? In fact, it's a good thing for Star readers to see the two stories side by side.

The Pacer team can afford to voluntarily dip into their well-filled collective pockets, and run neighborhood libraries and such.