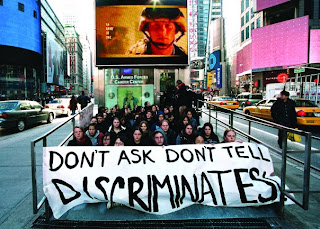 The AP reports that the proposed repeal is in trouble because of mounting Democratic opposition:

WASHINGTON — A lukewarm endorsement from Defense Secretary Robert Gates and opposition among some Democratic lawmakers cast doubt Tuesday on a White House-backed proposal to lift the ban on gays serving openly in the military.

Conservative Democrats were hesitant to back the compromise struck Monday by the White House and a small group of more liberal lawmakers who fear that repeal efforts will be doomed if Republicans regain control of one or both houses of Congress after fall elections.

The plan would overturn the "don't ask, don't tell" law but still allow the military to decide when and how to implement any changes to accommodate the new policy.

Gates said Tuesday he supports repeal but would prefer that Congress wait to vote until he can talk to the troops and chart a path forward. A study ordered by Gates is due on Dec. 1.

Some lawmakers took a similar stand. "I see no reason for the political process to pre-empt it," Sen. Jim Webb, D-Va., said of the military study.

Obama has vowed to help repeal the 1993 law, which prohibits the military from asking service members whether they are gay, bans homosexual activity and requires that gay troops not discuss their sexual orientation.

Gates and Adm. Mike Mullen, chairman of the Joint Chiefs of Staff, say they agree that the ban should be lifted yet want time to complete a wide-ranging study on how to do so without causing turmoil.

With the political clock ticking, several lawmakers were planning this week to push for an immediate suspension on military firings related to sexual orientation.

In a deal brokered by the White House on Monday, Sens. Carl Levin, D-Mich., and Joe Lieberman, I-Conn., and Rep. Patrick Murphy, D-Pa., announced they would introduce repeal legislation that would require military approval before it would take effect.

Levin said he wasn't sure he had enough votes to pass the measure, as speculation surfaced that supporters were still at least one vote short.

While Webb said he would oppose the measure, Sen. Susan Collins, a Republican, announced on Tuesday that she would support it. Sen. Ben Nelson, a conservative Nebraska Democrat who also sits on the panel, declined to say how he would vote.

Sen. Scott Brown, a Republican seen by many Democrats as a potential swing vote because he represents the heavily Democratic state of Massachusetts, said he was unlikely to agree to a repeal this week.
...

"Without a repeal vote by Congress this year, the Pentagon's hands are tied and the armed forces will be forced to continue adhering to the discriminatory 'don't ask, don't tell' law," Joe Solmonese, president of the Human Rights Campaign, said Monday.

Even though I am a conservative on both economic and most social issues, I don't see the point of this policy. One's sexual orientation doesn't affect his or her ability to serve in the military. If a straight soldier's morale is somehow negatively affected by having to serve along side a homosexual soldier, well then that's the straight soldier's problem. It's the same argument - morale - that was used for years to avoid racial integration in the military until the 1950s. Racist whites, in particular those from the segregated south, didn't want to serve along African-Americans. While sexual orientation is not the same thing as race, in this case the policy belies stereotypical attitudes that should be assigned to the scrap heap of history.
Posted by Paul K. Ogden at 5:20 PM

The one thing that Obama probably has wide support on, repeal of DADT, and he has dragged his feet on it every chance he got.

It really is a shame.

This policy imposed on members of the military by President Bill Clinton, is so childish.

Marycatherine Barton got it totally backwards: Clinton tried to remove the ban on gays in the military but the military and conservatives IMPOSED D.A.D.T. on Clinton -- in some ways, it was a teeny step forward from the old days of gay-witchunts in the military. Clinton signed the Joint Chief of Staff's legislation regretfully.

Indy Student now blames President Obama on the total opposition by the House GOP, conservative Senators and a few conservative Democrats? The public indeed supports repeal of DADT but trying to get it through the Congress in the face of fierce and determined GOP opposition is damn difficult.

Indy Student might try getting Lugar, Pence, Burton & Buyer onboard repealing DADT instead of whining about President Obama.

Wilson, notice how I didn't mention the GOP. The Democrats have wide majorities in both houses (did have 60-40 earlier in the Senate) and could've done it at any time. The Bush administration did this often, with much smaller majorities. It's a fairly simple piece of legislation to push through, yet it's taken this long to get to a vote.

Often, the Obama administration is it's own worst enemy, winding up defending Bush and Clinton era policies that Obama campaigned against. Jonathan Turley writes up an article about that here: http://jonathanturley.org/2009/09/20/obama-administration-moves-to-dismiss-lawsuit-by-gay-married-couples-over-federal-benefits/ and has written several articles on how Obama's DOJ has defended Bush era torture policies.

Actually, it was President William Clinton who first formulated this policy of "don't ask, don't tell", not either of the Bushes. Google it.