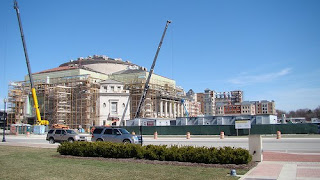 Just when we think municipal government could not be any more irresponsible than Indianapolis and its plan to hand $15 million more in taxpayer funds to the Indiana Pacers, Carmel shows it is as equally reckless when it comes to handling taxpayer money. The Indianapolis Star reports that the administration of Mayor Jim Brainard is going to ask the Carmel City Council for a $2 million taxpayer subsidy for the Carmel Arts Center, with the pretentious name "The Palladium." According to Mayor Brainard, the building will always need a government subsidy. Of course that was not at all what Mayor Brainard said when he originally pitched the $150 million arts center.
Council President Rick Sharp urged passage of the proposal and said the city can't afford to let the nearly complete arts center fail.
Once again we have a legislative body, in this case the Carmel City Council, that did not do due diligence in asking questions and demanding answers from the Brainard administration before voting to build this white elephant. A better name for the building would be "The Albatross" because it will certainly be a financial burden around the neck of Carmel taxpayers for years to come. Carmel residents only have themselves to blame for continuing to re-elect a Mayor who spends taxpayer money like a drunken sailor. My apologies to drunken sailors everywhere for the comparison.
Posted by Paul K. Ogden at 3:28 PM

They could always stop airing these commercials I hear on WXNT and WIBC. It doesn't even open until next January.

That'll save some money, right?

Maybe they should talk to the Murat Shriners and Live Nation on how to finance and run a successful events venue without leeching off taxpayers?

I agree, IS. It's insane to run those commercials so many months away before it opens. I wonder who came up with this advertising strategy.

People like to react to things. You advertise the Palladium and they are pumped up to go. Then you tell them it will be 9 months before it opens and you've lost the effect of the advertising.

At least the Palladium will be a worthwhile public works project. It's quite gorgeous, as well.

As the wealth, power and intellect of the Carmel-Indy metro area increasingly resides in the Carmel portion of the area, the Palladium will provide a first-rate arts facility for CarmIndy.

This is cheaper and of infinite more benefit to the area than the Colts stadium. If we're going to waste money on stupid Football stadiums, we should do something to salvage the intellect and taste of our community.