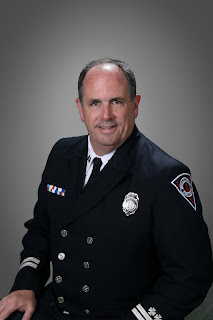 Previously in this blog, I wrote about double dipper Gary Coons who in addition to being Perry Township Trustee, had a full-time job with the City. I also wrote about Hank Bosworth, who did Coons one better by having three public payrolls jobs - a highly paid full-time position in the Marion County Sheriff's Office, head of the Homecroft Police Department and a security job with Indianapolis Downtown, a non-profit corporation subsidized with milllions of dollars of taxpayer money.

Today's blog brings us the remarkable story of Stephen F. Bradley who holds down a full-time battalion chief position in the Indianapolis Fire Department, with an office located in Perry Township, as well as a full-time job as head of security for the Washington Township Schools. The jobs provide plenty of perks. In addition to benefits, Bradley gets the use of a take-home vehicle on both cars. Remarkably, despite working 80 hour weeks, Bradley has time to drive from his home in the Geist area to Perry Township and then back up to his Washington Township job. Of course, he probably needs two jobs to afford the house in Geist.

Diana Vice of Welcome to My Tea Party reported on the situation last week:

The list of disgruntled current and former Securatex employees appears to grow longer with each passing day as additional information about the growing school-related controversy continues to emerge.

Questions have now been raised about the legitimacy of the security operation at Washington Township in addition to whether the position of "police chief" is full-time or part-time.

According to inside sources, the superintendent hired Steve Bradley to a full-time position to oversee security operations at a salary of just under $60,000 (plus benefits) per year; however, officers allege that the security department has been supervised on a part-time basis since Bradley also serves as Battalion Chief for the Indianapolis Fire Department at a salary of over $80,000 per year.

"The primary question is doesn't the school system need a full-time chief to manage the security operations instead of a full-time fireman?" asked one insider.

Bradley, who reportedly works 24 hour shifts every third day for the Indianapolis Fire Department, would not be available in the event of a security emergency within the school district say insiders.

Some are also questioning the way Bradley is running the department.

"The main objective that Chief Bradley tells his officers is to make the school administration happy and make no waves," said one insider. "Disregard the rules and laws and word reports to keep the media attention to a minimum," he continued.

Many officers believe that the safety of school children and teachers is being compromised because of this type of attitude.

In addition, sources say the school district also employs an assistant chief who also works as a security guard for a private employer. Questions have also been raised about whether or not time cards reflect actual work performed for the school district. Both supervisors oversee about 20 security officers according to insiders.

"The school police in Washington Township is not a police department," said one insider.

Some say that the marked cars with an official police emblem, along with uniformed officers carrying guns, presents an image that Washington Township has a legitimate police force with arresting powers when that may not be the case at all since officers are employed by a private security firm and not an official police department.

"Several of these school officers have no police powers, but do wear a police uniform and carry a gun along with driving a fully marked police car," said one insider.

According to insiders, some officers with no police powers are driving official police cars and have access to police radios, computers, and police incident files.

"When it comes to police cars at Washington Township, individual officers who lease their cars to the township own several of these cars," one insider stated. "Then along
comes the Marion Co. Sheriff who wants all the school's cars leased to [the Sheriff's Department]."

Insiders say that these cars were leased to the sheriff with the stipulation that no one who is not a special deputy with EVOC training are authorized to drive the police vehicles.

"The Sheriff doesn't know... that these officers own several cars are now leased to the sheriff," said the insider. "This means the sheriff in reality is leasing personally owned cars and many times these cars are driven by unauthorized personnel including non-empowered security guards, school cadets, and outside police agencies."

Questions were also raised about tax dollars funding expenses such as fuel, maintenance and insurance. In addition, it was alleged that some of the police cars are driven outside of Marion County in violation of the Sheriff's policy.

These are serious issues for the school board to address, and we can only hope that they take their responsibilities seriously rather than allow the superintendent to continue to call the shots. I hope they realize that it was mismanagement that helped create such a monumental mess, but the legal liability rests with the duly elected governing board.

This might be a partial explanation for the high unemployment numbers around the country. Many good jobs may simply be taken by people who already hold another full-time, taxpayer funded job.

I wonder how both employers feel about this employee working two (or more) full-time jobs? Do they even know?

Of course, that's assuming that there are actually two (or more) sets of non-overlapping work weeks.

If I were a fireman, would I want the battalion chief to be working tired during an emergency? How confident would I be about a person's judgement who is working 80 hours a week (or more)?

As a taxpayer, who here thinks that Mr. Bradley (or any other) is giving us 100% when he is "on" for each taxpayer-funded job?

Did you know the Sheriff 'paddy wagons' are take-home vehicles? Somebody explain that one to me.

I thought that might be true. I see them being driven all over the place at all hours of the day and night.

Almost all firefighters work on their days off. Some work for the state, some for the county, some meter readers and some substitute teachers. Indianapolis Fire Department battalion chiefs do not have take home vehicles. Chief Bradley doesn't live in a house at Geist. He lives in the very modest house he bought over 15 years ago. You need to get your facts straight before you start pillorying some one