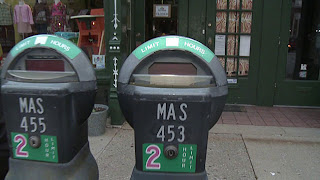 Privatization as a concept took off in the 1990s. It involves taking a service providing by government and contracting out that service to the private sector. The idea behind concept is that, by leveraging free market competition, consumers will be provided a quality service more cheaply than government can provide that service.

As a fan of privatization who watch it unfold during the Goldsmith administration, I read a number of books on the subject. One of the things cited as essential for the success of privatization is that a vendor not receive long term contracts and that there be vendors on deck ready to go should the first vendor fail to provide quality services.

Privatization as a concept has clearly lost its way. Increasingly it has become about giving monopoly, long-term contracts to vendors in order to generate up front cash. The vendor can then charge more over the term of the contract. In short, it's about politicians extracting money from the generation that will be living 20, 30 and 40 years from now.

It's not clear where privatization went off the tracks, but my guess it has something to do with the big money potential contractors pour into campaigns. One only has to look at the campaign report of Indianapolis Mayor Greg Ballard to see that it is filled with vendors who are seeking contracts from the city. A long-term monopoly contract for parking will be a plum reward for a political contributor.

This morning, the Indianapolis Star reports on the city's efforts to hand out a long-term contract to own and operate the parking meters and the city's parking garages:

The city today will take its first step toward overhauling public parking management. The effort could bring high-tech meters, extended hours and increased parking rates in Downtown and Broad Ripple.

Officials will put out a request in search of companies interested in operating about 24,000 public parking spaces at meters, garages and lots under a long-term contract. Those spots are owned by the city and other public entities but are mostly privately run by a hodgepodge of operators.

The goal in bundling them under one manager is to wring more money out of the assets -- through operating efficiencies, new meters and potentially higher rates -- and channel the extra revenue toward much-needed improvements to streets, sidewalks and curbs in Downtown and Broad Ripple, where the parking spots are located.

City officials won't yet say how much they could generate through the deal, but it could be tens of millions.

Michael Huber, the city's director of enterprise development (whatever the heck that is), goes on to offer a lot of nonsense about how the purpose of the administration's privatization effort is to look for "efficiencies" and "convenience."

Let's dispense with the disingenuous Huber spin and have some straight, honest talk. This proposal by Mayor Ballard is about the administration trading the city's income flow from parking for the next 30 to 40 years for an upfront payment from a contractor (and quite likely a Ballard contributor). Parking rates will go way up and the hours for meters will be extended. The contractor will make lots of money. It doesn't matter if long term the deal is not a good one for the city. The Ballard administration gets substantial cash up front and will be long gone from office before the full impact of the deal hits.

Watch too - the Ballard administration will probably put in the contract a provision limiting or capping parking rate increases for the first few years. That will allow Ballard to escape the blame for raising parking rates during the 2011 campaign should he run for re-election.

The Indiana General Assembly needs to intervene to stop these sorts of long-term privatization contracts by local governments which mortgage the future in exchange for politicians getting cash today. In the meantime, hopefully the City-County Council will reject the Ballard parking proposal.

Photo appeared in an Indianapolis Business Journal on-line story.
Posted by Paul K. Ogden at 7:14 AM

Will they factor in the (adverse) impact on downtown business? Of course not.

It astounds me they want to lock in one private contractor for many decades. These deals should be for 3-5 years so that competitors can negotiate for them and likely keep the consumer price lower.

Instead, like with the toll road, they will get a company which will surely double the parking rate.

At the very least, we should demand a rate schedule for each year of the term of the contract so there's no question about what our future looks like. No whining from them about suddenly needing to raise rates for whatever excuse they dream up.

My guess is they're going to cap or limit parking fee increases for the first six years. That will allow Ballard, should by some miracle he get re-elected, escape any responsibility for parking rate increases on his watch.

Councilors, reject Ballard's parking proposal, for the sake of your constituents.

so more hoops for wrongly citied Citizens to jump through by the Contracted Parking Enforcement people.

Fact: An IMPD Officer responded to a crash downtown during the evening rush hour. Upon arrival he had the vehicle which was block a travel lane pull over to an open meter spot while the Officer was putting together the information needed to complete a crash report. A Contracted Parking Enforcement person came by the parked vehicle, with driver waiting for Officer to complete and wrote the Driver a ticket for expired meter. The driver informed the Contracted Parking Enforcement person that he was told by the IMPD Officer to park there until the IMPD Officer was completed. The Contractor did not care and continued writing the ticket with their hand held computer. The Driver told the IMPD Officer what was happening and the IMPD Officer told the Contractor that they did in fact tell the person to park there while to clear travel lanes. The Contractor would still not void the ticket. The IMPD Officer asked to speak with one of the Contractor's supervisors and the Contract Supervisor then became rude with the IMPD Officer. The IMPD Officer called an IMPD Supervisor to handle the problem, and the Contract Supervisor still would not void the ticket. Needless to say a Contract caused a Citizen to be ticketed whom shouldn't have, caused an IMPD Supervisor whom had other business concerning their shift to conduct, and finally an IMPD Captain to void out a ticket that should not have been issued in the first place.
Take into account all the time put into getting a ticket voided, and I am more then positive you are way over the percentage of a good ticket would have brought in.
Dennison Parking is the current contractor, and the contractor at the time of the incident.

Any time you hear high-minded strategies that indicate how government will be come reformed, efficient of modernized; be sure that it is nothing more than a new game devised to transfer wealth from taxpayers, fee-payers to friends of the politicians and their sycophants.

I recently read an interesting article on the subject, probably at Lewrockwell.com or Mises.com that described privatization as a tax-and-spend scheme, but not in that order.

Privatization allows politicians to dip into **future** budgets to fund present projects, stripping future governments of these revenues or the ability to control the public assets.

Here's something on the subject. There's more for the reading.

A Left-Rothbardian Approach To "Privatization"

What exactly does it mean to "privatize" a service or industry? As I have argued before, there is a lot of confusion over the precise meaning of the terms "public" and "private" to begin with. The fact that state-controlled property is called "public" is misleading because it obviously is not actually controlled by the public in any real sense. The public bears the costs for its maintenance, but they do not actually have any control over it in a way that a real owner would. The public is of course nothing but a term representing the accumulation of private individuals. Fundamentally, the purpose of "privatization" is to transfer ownership or control over a given piece of property or service from the state to private individuals.

The question inevitably arises over how exactly to go about doing this. The typical proposal for privatization is more or less to sell it to the highest bidder, which predictably is going to be a large corporation, probably one that already is in bed with the state to begin with. From a libertarian perspective, this is problematic for a number of reasons. First and foremost, the state is not a legitimate owner of the property to begin with, so how can it sell "its" property? The state, at least by Rothbardian standards of property ownership, is a criminal organization because state controlled property is stolen property. Proposing that the state sell off the property it controls would be no different than proposing that a thief sell off the property that they stole. But this would be to propose that the thief deserves compensation rather than their victims. To ignore this analogy would be to treat the state as if it were a legitimate private property owner, which it isn’t according to any sensible libertarian understanding of the institution.

Furthermore, the ability to buy property off of the state in this scenario would be quite an exclusive privilege only available to a select set of private interests that already are in patronage with the state. The masses at large do not have the ability to be in patronage with the state in this way, nor could they afford it even if they had such access to the institution. This could be seen as constituting a barrier to entry for most people, as only a handful of private elites are allowed to have access to such patronage. In selling an entire industry or swath of property to one particular private group or corporation, power has merely been transferred from one singular central institution to another. While this might not necessarily qualify as a monopoly under the Austrian definition of a monopoly, it most certainly is centralized and the institution or private group in question most certainly is privileged.