New Indianapolis Airport First in Customer Satisfaction? Not to This Customer 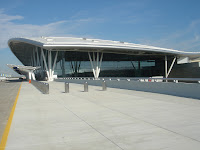 The Indianapolis Star is reporting that, according to J.D. Powers and Associates, the new Indianapolis Airport ranks first in passenger and visitor satisfaction of the 64 major airports.

Okay, I'm not buying that. I've been to the new airport several times. The wait times between shuttles is extremely long, and when they finally do show up, the shuttles are packed. When you get to the airport, the signage is non-existent. In fact the signage in the Indianapolis Airport is by far the worst of any airport I have ever been to. For example, when you walk out of the security area to go to your gate, it is very easy to take a wrong turn and walk right out of the secure area, necessitating yet another trip through security. Of course it was very difficult to find the screening area in the first place.

I was told by a TSA official that the people who designed the airport didn't want the look of the airport to be "cluttered" up by too many signs. So much for the needs of the passengers.

It may have some nice restaurants and shops, but the airport is not a user friendly airport and to me that is what is most important.

I have written about the airport a few times before: