The Bayh Question The Media Should be Asking 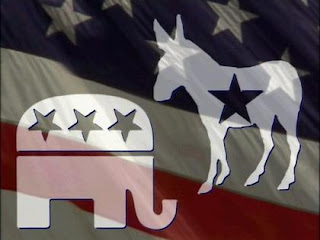 While the media sorts through the decision of U.S. Senator Evan Bayh to not run for a third term, there needs to be a closer examination of the time frame for Bayh's decision, including who new of Bayh's decision and when.
The reasons that Sen. Bayh has offered thus far - partisan rancour in Washington and a desire to spend more time with his family are certainly legitimate reasons to not run for a third term. Those reasons, however, do not justify the extremely late notice that deprived state Democratic voters of the right to choose Evan Bayh's replacement.
Sen. Bayh's announcement came less than 24 hours before the signature deadline for U.S. Senate candidates. Given the late announcement, it is an almost certainty that no Democrat will be able to muster the 4500 signatures (500 per congressional districts) needed to qualify for the primary ballot. Those signatures would have to be turned in today by noon. Without a candidate, party insiders get to choose the candidate, in particular the State Democratic Party leadership, led by State Chairman Dan Parker.
Bayh's stated reasons would have undoubtedly been known to him him months ago if not years ago. They are not the type of reasons - such as the illness of his wife cited by Rep. Buyer - that would explain a late decision not to go for another term. Reasonable people would look at the lateness of Bayh's decision and the facts he cites justifying it and conclude that Bayh deliberately waited to announce his decision at a time when it was too late for other Democrats to enter the primary, leaving the nomination up to party insiders. The media should be looking into when Chairman Parker knew about Bayh's decision and whether he deliberately kept the information from being public so that insiders could pick the nominee rather than Democratic voters.
Republicans are not above these type of insider games themselves. Locally, Marion County Prosecutor Carl Brizzi opted against running for a third term, making his announcement the day of the deadline for filing for slating. That allowed insiders to all but pick his replacement, which choice was at first Helen Marchal a high-ranking supervisor in Brizzi's office. That insider choice was later replaced by Mark Massa, Governor Daniels' chief counsel, when Marchal decided against tossing her hat in the ring.
An examination of his campaign finance report shows that Prosecutor Brizzi spent almost all the money he raised in 2009 in 2009. It was clear from the pattern of spending that Brizzi had early on made a decision not to run in 2010. Yet that decision apparently remained a secret throughout 2009 and for the first part of 2010. As Marion County GOP Chairman Tom John is a close personal friend of Carl Brizzi, one has to wonder when he knew of Brizzi's decision and whether he kept it a secret so, like with the Bayh decision, insiders could effectively choose the nominee instead of the party regulars in a wide-open slating contest.
The media should be investigating these matters and asking the questions. The timing of the Bayh and Brizzi decisions appear to both be designed for the purpose of letting insiders choose the nominees instead of the ordinary folks who make up the parties' electorate.
Posted by Paul K. Ogden at 7:47 AM

His speech left me unconvinced that his words matched his motive. He was reading totally without emotion and his sing-song delivery/intonation sounded oh so insincere.

DI, that's the way Bayh is. I'm pretty sure he's a robot.

Dan Parker stated on TV he was told of Bayh's decision just last weekend. I had spoken to Parker about Bayh's candidacy at the Slating Convention Saturday morning - Parker gave me no inkling that he knew something else was afoot.

I believe Wilson, here, and Dan Parker, in this regard, and can certainly understand Evan Bayh's completely giving up on the U.S. Senate when he did, and for the reasons he gave. Confidence in Congress is eroding now, among the rank and file Democrats, according to Gallup.

As for more proof of Bayh's sincerety, on MSNBC this morning, he, no punches withheld, stated that the American people needed to deliver a 'shock' to Congress, by voting incumbents out en masse, and replacing them with people interested in reforming the process and governing for the good of the people, rather than for deep-pocketed special interests. Sounds to me like he has gotten religion, and I, among most, love him for that.

Marycatherine - what exactly has Bayh done to side with the anti-lobby and reform Congress crowd?

I sooner believe he didn't have enough signatures than he is finally standing up against lobbyist control of Congress.

I surely understand the scepticism of Had Enough Indy, expressed here. Paul Craig Roberts has concluded that, according to Evan's statements these days, Bayh has gotten tired of being a whore for the corporate lobbyists who rule the USA. With me, he applauds Senator Bayh for exposing that Congress reeks of corruption and needs to be "overthrown".