Asking the Impolite Question: GOP Sheriff Candidate Dennis Fishburn Needs to Be Asked How Much He Was Paid by Wishard Campaign 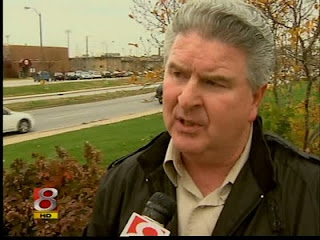 I was told that the question everyone wants to ask hasn't been asked because of sensitivity to the shooting of his son, Jason. I'll bite though. That question is how much Dennis Fishburn's was paid to act as spokesman for the Wishard campaign.

Perhaps the answer is $0. However, since it appears the Marion County Election Board is going to allow the Wishard PAC to conceal $850,000 or so in campaign expenditures by using a PR firm, Hirons & Associates (which employs the Mayor's son) to pay its campaign bills, Fishburn should be answering the question how much he was paid for his role in the campaign.

I still haven't decided who I will support - Fishburn or Bart McAtee should he decide to run against the slate. Certainly McAtee's association with Sheriff Frank Anderson's administration is more than a little troubling. But Fishburn's affiliation with the very dishonest election campaign put on by the Wishard folks last Fall makes me wonder about his integrity. Fishburn made no effort to distance himself from the efforts by Wishard supporters to mislead voters in the wording of the referendum or in public statements that the Wishard folks were not intested in raising taxes. The only reason the referendum was needed was that the Wishard supporters wanted the ability to pay for the new hospital by raising property taxes, above the property tax cap no less, when the inevitable times comes that their little nursing home Medicaid scam be derailed by the feds in the future. When Wishard comes calling for our property taxes to be raised, Fishburn deserves some of the blame for his role in misleading Marion County voters about the referendum.

In the meantime, Fishburn needs to public tell voters how much he was paid to be spokesman for the Wishard campaign.
Posted by Paul K. Ogden at 10:28 PM

You could be right. Most people I talk to suspect that he got paid something. I'm not sure he did though.

Frankly, I'd rather see the evidence - the campaign finance report that lists any expenditure, rather than simply take someone's word. Trust...but verify.

It's going to be tough for me to overlook Fishburn's role in the Wishard campaign.

IndianapolisIndiansfan said...
This comment has been removed by the author.
February 22, 2010 at 11:27 AM

I see that "Indianapolis Indians Fan" has "The Random Satirist" as a 'blog I follow' and 'Random' posted, then 'Indians' posted a few minutes later, then 'Random' deleted their post. I wonder what 'Random' originally posted? Did somebody use the wrong userid?

Thanks, II. Of course, it wouldb e nice if Wishard came clean and provided the documentation themselves regarding who received campaign money. Fishburn could have condemned the way voters were mislead by Wishard during the campaign. He did nothing of the sort though. Instead he brags about being involved.

Since as candidate for Ma. Co. Sheriff, Dennis Fishburn writes complements about the Wishard team's campaign, he should also condemn the way Wishard repeatedly misled the media and voters about the outcome of the referendum. If he doesn't, I hope he loses the primary.