The Marchal Conspiracy Theory I Am Not Buying 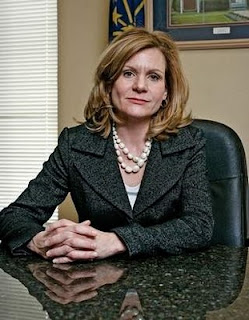 A certain blogger whose name rhymes with "Raoul" suggests on his blog this morning that Republican Helen Marchal dropped out of the race for Marion County Prosecutor because Democrats had said they would go after her husband, Jeff Marchal, a Democrat,who serves as an appointed commissioner in the Marion County Superior Court system and had previously sought the Democratic nomination for judge.

In the same post, "Raoul" takes a shot at Republican "conspiracy theorists." Any Republican who takes a series of facts and connects the dots, reaching logical conclusions about the Republican establishment, will be called a "conspiracy theorist" by Raoul. This is a common political tactic - when you can't win on the issues, start calling the other side names. The irony is that "Raoul" himself offers a conspiracy theory of his own this morning, indeed a whopper.

Unlike "Raoul" I'm not going to engage in name-calling. Instead, I'll take his theory and analyze it.

What would be the Democrats' motive for engaging in this behind-the-scenes threat? Helen Marchal had major negatives that would have hampered her campaign. They are:

What would have otherwise been a strength, her experience in the Brizzi-led prosecutor's office, has been turned into a major negative by the events of the past few months. She likely would have been easy for the Democrats to defeat in the Fall. So the Democrats went out and, behind the scenes, forced Helen Marchal to drop out by threatening to go after her husband, leaving the Republicans in a position in which they could possibly recruit a stronger candidate?

The only way this conspiracy could be true is if the local Democrats are the biggest idiots out there. I don't agree with my Democratic friends on most issues, but I'm pretty sure they aren't so so stupid as to run Helen Marchal out of the race by threatening her husband.

I can see how it would be an attractive theory. That after all is the way the Marion County Republican establishment has for years operated. If you challenge their power, they''ll threaten your employment and go after you personally, suggesting they have personal stuff on you they will leak if you persist in challenging their power. Then if that doesn't work, they'll go after the employment of family members.

The only way to stop these despicable tactics is to expose what they're trying to do behind the scenes. That's why I have always preached that change in the Marion County GOP is never going to happen until reform-minded Republicans are willing to speak out publicly and expose the corruption and insider dealing in our party. You'll never defeat the GOP Establishment which has a stranglehold on our party by negotiating behind closed doors. That is their strength. It's when you turn on the lights that the cockroaches scatter.
Posted by Paul K. Ogden at 10:05 AM

Gosh, Paul its not hard to figure out who Abdul covers for using his media position.

He flat out told me in front of a bunch of people that his best friend is Tom John.

You are a direct threat to his BFF, Tom John. Of course he's going to attack you personally. He can't attack your theories, because the dots tightly connect and make too much sense even to a outsider like myself.

Tom John never supported Ballard's campaign either. That's revisionist history for sure! They were in their back rooms putting their money on Peterson.

Looks like Abdul is up to his anonymous blogging chicanery again, Paul. I got a big laugh reading on his blog his claim that he had to go over Illinois to practice law on Monday. The guy doesn't practice law; he only pretends to practice law on his radio show and his blog. I've never seen someone with such an inflated ego with so little to support it.

This will be an interesting election in Marion County. Ballard has the money and nationally the Republicans have the momentum, but Marion County is still a primary Democratic county. The Democrat's certainly have ammunition to use against Ballard (county club politics comes to mind) but will they have a strong candidate? My gut feeling tells me they will lose control of the city council and every other office in Marion County with the possible exception of the mayors office. I am not sure who is running his reelection campaign but Ballard cannot go negative. I would use professional voice overs with him asking for your vote(something Peterson never did) at the end of the commercials. The Democrats will have to hit him with negative advertising which may not work. Doesn't much matter who wins by the time they take office the state and the city will be broke. We are not coming out of this depression until 2012 and it will mostly be a jobless recovery. Well that is my take.

Ever consider the following scenario?

Helen is secretly mortified that Brizzi has turned out to be such a scumbag and she wants far away from him, wants out. She knows if she up and quits it's even more trouble for the party. So, she puts her party first and throws her name in the hat to run for office, thereby invoking the Hatch act and resigning. Shortly after resigning to "run for office" she conveniently quits the campaign, using her family as the excuse. Woo woo! Her problem is solved. She's away from Brizzi and Tim Durham and the others who are all about to fall like dominos.

Scenario 2: Helen was stupid enough to also trade in Cellstar and/or CLST Holdings and the gig is up. She cuts a deal with the SEC in return for immunity, and she quits the offices using the above scenario as her exit strategy.

Helen had a reason for quitting and it wasn't her three little kids. She is now with no income and no job in a tight economy. C'mon people, think about it.

Marchal will be a tackling dummy. There is no way the Dems would push her out. Your analysis is more likely than not accurate.

Guy, Mayor Ballard has about a 1 chance in 20 of winning re-election. The odds of Republicans holding on to the Council are greater, not less, than the unpopular Mayor. Still the odds for continued Republican control of the Council are very poor.