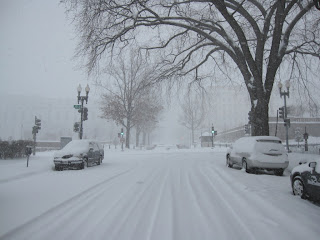 Mother Nature sure has a sense of humor. President Barack Obama returns from a summit in Copenhagen, where he discussed the the dangers of global warming with world leaders, to find Washington D.C. being hit with the biggest December blizzard ever. (Let's not forget, Winter has not even officially started yet.)
A couple years ago, the advocates of the "Man is Causing Dangerous Global Warming That is Going To Destroy the Planet" theory, faced with evidence the planet might not be warming, had the presence of mind to switch their warnings from "global warming" to "climate change." (Since climate change has been going on for the entire 4.5 billion year history of the planet, it is is pretty certain to continue happening.) Now everything that happens weather-wise supports their theory.
A Fall blizzard? Yep, yet more evidence of dangerous "climate change."
Posted by Paul K. Ogden at 1:51 PM

Tell the polar bears whose hunting season is almost a month shorter because of warming in the Arctic that it's all a mirage.

One blizzard does not an argument make.

Actually I agree with you that the Washington D.C. blizzard means nothing. So too does your evidence of global warming.

Of course if they looked at a larger picture, they'd find that there have been periods in our planet's history much warmer than today and that man has done much better during warmer perids. But, hey, what the heck, let's just assume that today's temps are ideal and that any change will be devastating.

However, to think fluorescent bulbs, huge taxes on fuel or building electric cars is going to have any effect on temperature is utter insanity.

As long as the proponents of such nonsense are taking private jets and fuel-inefficient limos to reach their podiums where they tell us how awful things are, I will not take them seriously.

One of the papers I read (vs simply listening to Al Gore blather) points to enormous increases in mercury in polar bears and their prey.

Mercury! You know, the stuff they put in the new-fangled light bulbs we all are soon to be forced to buy.

HITH? What caused the ice age to arrive and then to melt?