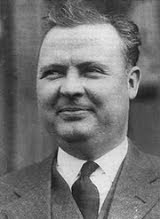 He dominated Republican politics in the early to mid 1920s. Although he claimed to be a Prohibitionist and a devout Protestant, famed Indiana Klan leader and Irvington resident D.C. Stephenson drank heavily and was a playboy. He used his power and money to get the things he wanted in life.

In the early to mid 1920s, the Klan dominated Republican politics in Indiana. Unlike in southern states where the Klan affiliated most closely with the Democratic Party, the Klan in Indiana infiltrated Republican politics. In the South, the Klan's chief target were African-Americans. However, in Indiana the Klan's chief targets where Catholics and immigrants. (My grandfather used to tell the story of how the Klan tried to burn a cross on the lawn of our rural Catholic Church only to be run away by neighbors toting rifles and shotguns.) In Indiana, there was a distinct division of the political parties among religious lines. Catholics were almost exclusively Democrats, while most Protestants were Republicans.

By the middle 1920s, Klan membership in Indiana had grown to 250,000, which was about 1 out of ever 3 men. (The Klan had a separate auxiliary for women.) If you subtract out Catholics, Jewish and black men who were not allowed in the Klan, it is a safe estimate that 1/2 of all Protestant men in Indiana were in the Klan in the 1920s. In photographs of the era Klan support can be seen in the form of "100% American" signs placed in store windows.

Although people picture the Klan as involving men in hoods riding on horses and burning crosses, the Klan in 1920's Indiana actually had a significant social component. It held picnics, ran sports leagues, held parades, etc. In photographs of the era, Klan support can be seen in the form of "100% American" signs placed in store windows.

D. C. Stephenson, who became a millionaire from taking a portion of Klan initiation fees and selling Klan clothing, used his money and power to dominate Republican politics. In exchange for Klan support and bribes, he was able to get many politicians to agree to sign a paper agreeing to support the Klan agenda. Some politicians were even on the Klan payroll. The Center for History provides a quick summary which, in part, is quoted, below:

D.C. Stephenson went on to become a powerful political figure in Indiana. His rise to power was short-lived, however. In 1922 David Curtis Stephenson was appointed Grand Dragon of the KKK for Indiana. In 1925 he had met a statehouse secretary, Madge Oberholtzer, at an inaugural ball for Governor Ed Jackson. She was later abducted from her home in Irvington, a neighborhood of Indianapolis and taken by Stephenson and some of his men to the train station. While on a trip to Hammond, Indiana, Stephenson repeatedly attacked and raped Oberholtzer in one compartment of his Pullman railcar. In Hammond she took poison to frighten Stephenson into letting her go. He immediately rushed her back to Indianapolis where she died a month later, either from the effects of the poison or the severe bite marks she incurred during the rape.

Stephenson was arrested and charged with second-degree murder. The sensational trial took place in Noblesville, Indiana in 1925. His conviction sent Stephenson to the Indiana State Prison in Michigan City, Indiana for the next 31 years (the longest imprisonment in this state for that crime). He was released from prison in 1956 and faded into obscurity, however, not before causing the shocking downfall of many corrupt political officials within Indiana. When he went to jail he was convinced that Governor Ed Jackson, who he had helped elect, would pardon him. Governor Jackson never came through with the pardon and Stephenson began to talk.

With help from The Indianapolis Times (which won a Pulitzer Prize for its investigations), the structure of Indiana politics would be shaken. Stephenson began to talk about who had helped him rise to power and began to name names. The aftermath was shocking, indictments were filed against Governor Ed Jackson, Marion County Republican chairman George V. "Cap" Coffin, and attorney Robert I. Marsh, charging them with conspiring to bribe former Governor Warren McCray. Even Mayor of Indianapolis John Duvall was convicted and sentenced to jail for 30 days (and barred from political service for 4 years). Some Marion County commissioners also resigned from their posts on charges of accepting bribes from the Klan and Stephenson.

Today, the quid pro quo direct bribery of public officials is rare. Rather influence buying is normally more indirect, involving a wink and a nod. It often takes the form of large campaign contributions, vacations, free dinners, gifts, and promised jobs in the private sector after the person leaves the public sector. While there are numerous differences between the Republican Klan scandal of the 1920s and the Durham matter, there are also marked similarities. Both eras involve Republican elected officials who were willing to look the other way in order to associate with a millionaire playboy who offered money and political influence.

It is a shame that the history of the 1920s Republican Klan scandal has been forgotten. It would have been a good warning for those Republicans who so quickly jumped on the Durham money train, while ignoring Durham's extravagant lifestyle and not asking more questions where he got the money he was spending.

For more on D.C. Stephenson and the 1920s Indiana Klan see:

I'd be interested to see Gary Welsh's thoughts, since he frequently drew comparisons between Advance America's Eric Miller and Stephenson in past AI entries.

This was the period where if one wanted to participate in Republican politics in Indiana, one joined the Klan.

Unfortunately, the anti-Catholic, anti-immigrant tenets of the Indiana Klan were all too prevalent in too much of Indiana. And, maybe "were" is the wrong grammatical tense?

I think that's why some of us who know history cringe when we see an anti-immigrant tide out there. They are exactly right that they should be legal to be here. The problem is our immigration laws are so incredibly screwed up it takes years and tens of thosuands of dollars o get through the process. What we need to do is fix the immigration laws AND deport people who don't follow the law. We need BOTH.