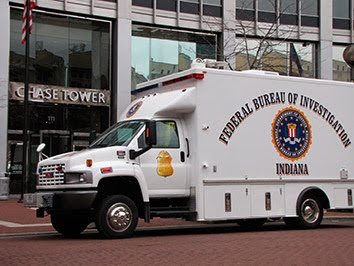 This picture on IBJ's home web page shows an FBI truck parked outside the Monument Circle offices of businessman Tim Durham's Indianapolis-based leveraged-buyout firm, Obsidian Enterprises.
I went to law school with Tim Durham. He was either valedictorian or close to it. I assisted Tim in his high class ranking by providing the foundation upon which his stellar academic ranking was achieved.
I did not know Tim terribly well in law school. He was a personable enough guy, easy to talk to. My classmates and I thought it was rather odd though when Tim, a single man in his mid-20s, suddenly started dating and quickly married an older, not overly attractive woman, who already had children. That older woman though happened to be the daughter of then City-County Council President and business tycoon Buert Servaas. When Tim parlayed that relationship (before it crashed and burned in a bitter divorce) and the connections it brought, into the opening of a business empire, my classmates and I understood Tim's strategy. He married to get ahead. Silly us. My classmates had thought hard work and being good lawyers would be our tickets to success. Tim though knew though relationships were more important to one's success.
Gary Welsh has an excellent post on the events today at Obsidian, along with links to previous stories. Likewise, IBJ has an article on the subject.
Posted by Paul K. Ogden at 6:01 PM

The introduction to a book with many chapters that will follow to the highest levels of government and politics in Indiana!!!

It has only begun on one playing field and will spread quickly!

Pandoras box has been opened ever so slightly.

The introduction to a lot of chapters to follow to very high places in Indiana politics and government!!!!!

All of them are running Ponzi schemes from the Fed right down to our own Tim Durham.

But right in Indiana will be a big shot in a lot of feet looking for bigger political futures. The overspray of the problems are being felt in many a back room in nap town tonight!

Joanie is delightful, charming AND attractive (not to mention the mother of Tim's son).

What does paragraph two mean? That you got an A- in Negotiable Instruments?

I don't know Joan Servass, but way to throw her under the bus. And right before a holiday too.

"I assisted Tim in his high class ranking by providing the foundation upon which his stellar academic ranking was achieved."

--I took that as a little self-deprecation, suggesting that Paul's class rank may not have been as high as Durham's.

I got that (as I have read Paul's vitae), I was just being snarky. Obviously, I must have also been too subtle at the same time.

Paul, why such a personal attack? Comments about his ex-wife are out of line in my opinion.

Sorry. I didn't mean it at all as an attack on Joan Durham. She certainly didn't do anything wrong. If anything she was the one who was taken advantage of.

Yeah, okay you got me Doug...a little spin on my class ranking. I was President of the Student Bar Association, elected by the entire student body. No, Tim Durham did not contribute to my campaign.

Geez, reading through these comments, I'm not sure why everyone is thinking I took a shot at Joan Durham. If anything she was victimized by someone marrying to get ahead in life.

You have to understand that during law school, as I recall, Tim dated younger, model-type women. Then all of a sudden, about the time of graduating, Tim starts dating an older women, with three kids, who while not unattractive, wasn't in the model category. Needless to say, that raised some eyebrows.

Okay, did I say it better that time?

Ms. Servaas-Durham probably doesn't care a whit what any of us think around here anyway.