"Ogden on Politics" Public Official Of the Month For October 2009 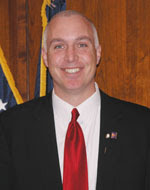 I hope this will be a regular feature on "Ogden on Politics." My goal is to highlight the work of a public official, regardless of party, who is fighting the fight for good government reform. In particular, I want to highlight those officials who stand up not for the lobbyists and big monied interests, but for the interests of average, everyday working men and women.
The first recipient of the "Ogden on Politics" Public Official of the Month award is Senator Mike Delph. While I am no fan of Senator's Delph's immigration measures, when it comes to good government reform, Senator Delph bats a thousand. This week, Speaker Pat Bauer introduced a reform agenda for the 2010 legislative session.
While I applaud Speaker Bauer for getting religion on government reform, we should never forget that Senator Delph was fighting for it long before it became a cause for insiders, like Bauer, House Minority Leader Brian Bosma, and Senate President Pro Tem David Long . They are all now clammoring to jump on the reform bandwagon. that Senator Delph has been driving for quite some time.
Before the 2009 legislative session, Gary Welsh of Advance Indiana discussed Senator Delph's legislative reform proposals:

Matt Tully's column this morning discussing lobbyist reform legislation Sen. Mike Delph is introducing in this legislative session is a refreshing change. Here's a look at Delph's proposals, which he shared with Tully recently over coffee:

We need more legislators like Senator Delph. Thank you, Senator, for a job well done.

This is a good idea. We all hash and rehash what's wrong. Time to give what's good a fair look, too.

DI, I agree. It's hard not to be critical. But we shouldn't overlook when people do things right. I don't think we should expect people to be "right" 100% of the time either.