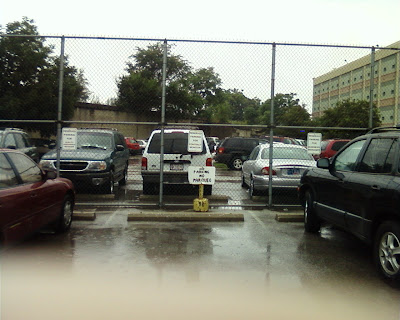 Click to enlargen.
The parking place is at CCA/Marion County Jail #2. The place is reserved for the contract monitor that Marion County Sheriff Frank Anderson appoints to ensure that CCA is complying with the contract it signed with the Sheriff. I and other attorneys from my office probably have been to this facility probably 60 times in the last couple years. Not once have we seen anyone parked in the spot. You'll notice that they even had to put up an additional sign so people would not park in the always vacant space.

Today I had it confirmed again from a recently released inmate that CCA is housing serious violent felons at Jail #2, contrary to what the Council is being told. People awaiting trials on misdemeanors are being housed in a dormitory environment right next to people who have committed Class A and B violent felonies. The jail is a hostage situation waiting to happen. Sheriff Frank Anderson knows this ... and he does nothing.

In the Fall of 2008, a Sheriff's spokesman told the Council's Public Safety Committee that the Sheriff need council approval to move money from one account to another so that he could pay CCA for inmate meals and for an inflation adjustment that CCA decided to take. The claim was not true. Under the Sheriff-CCA contract, CCA not the county, pays for inmate meals out of the per diem and the inflation adjustment happens automatically on 1/1 of every year. Later, the Sheriff's people told a Star reporter a completely different reason for the request, which was also phony. The money quite likely was transferred to CCA so CCA could pay its politically-connected law firm, Barnes & Thornburg. which had undoubtedly run up hundreds of thousands of dollars, if not millions, in legal fees representing the oft-sued CCA. I wrote about the matter on my blog last December. It also bears mentioning that the chairman of the Public Safety Committee which oversees CCA operation of Jail #2, is Ryan Vaughn, a B&T attorney.

Did Sheriff Anderson Mislead the Council Into Giving Private Jail Company Nearly a Quarter of Million Dollars It Was Not Entitled To Receive? (Monday, December 15, 2008)

Allegations against Sheriff Anderson continue to mount. One 20 plus year administrator employed in the Marion County jail system has told me that Sheriff Anderson will not oppose CCA because he is making money off of the phone system used by inmates at the jail. He also says that Sheriff Anderson refuses to allow inmates awaiting trial to attend funerals of relatives, even when faced with court orders. Today, I spoke with a former inmate whose mother died while he was awaiting trial on a misdemeanor. The new chaplain at CCA did not even bother to tell him until a week after her funeral.
The Department of Justice needs to take a close look at Sheriff Anderson's running of the jails in Marion County. There is considerable evidence to suggest that Sheriff Anderson may be personally profiting off the running of the jails while neglecting his statutory and constitutional duties to run those jails properly. If the DOJ decides to turn over the rock that is the Marion County jail system, it might be surprising what crawls out from underneath.
Posted by Paul K. Ogden at 1:23 PM

Just maybe that is how the sheriff affords a house on Geise, assessed valuation 778,000. Look it up on data central under Lawrence Township and Frank Anderson.

Jon, I think he makes $300K even before getting into the other stuff he's making on the side. That alone would be enough for a pretty fine house.

Are you going to request an investigation or would you like the PCC to move on it. I've said for the duration of my contact with Jail II and the inmates, as well as, the Treacy case that money is going into someone's pockets.

The 300k is close, 110K base salary plus tax a cut on tax warrants. Isn't the tax warrant portion of sheriff's pay due to expire in 2010?

Jon, I don't know. I was counting the tax warrants in the salary. He gets even more than that though...who knows how much. It's insane how we pay Sheriffs in this state.

At least Indiana Sheriffs no longer get to keep money that the Sheriff does not spend on inmate meals. That policy was insane. Or do some counties still do this?

I would like to know how many "merit" deputies are now on the department.
The "CONsolidation" moved all merit deputies to IMPD (except one or two).
If so, why does the sheriff need HUNDREDS of take-home vehicles for building deputies, special deputies, civil deputies, court-line deputies, etc?
I can't get anyone to answer any of those questions.

Everyone who reads this needs to alert city council to look into it further before the budget comes up.

Thanks Paul. I posted this on Facebook. People need to know what is going on.